Labour back with another landslide victory 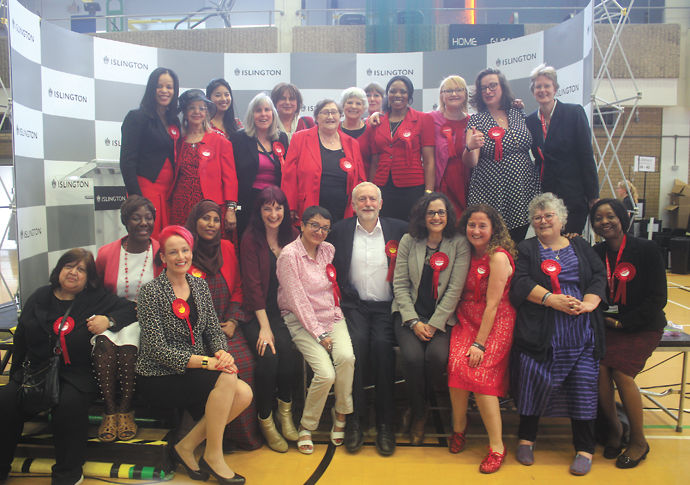 LABOUR has claimed another landslide election win, taking every council seat bar one for the second time in a row.

The ballot box blitz punctured Green hopes of expanding on their solitary seat on the council and kept the Liberal Democrats, who 10 years ago were in charge of Islington, and the Tories firmly locked out of the Town Hall.

While the local elections results were reported in some quarters as a catastrophe for Labour, the party increased its number of votes in Islington by nearly 8,000. A pattern saw Labour increase its tally of councillors in neighbouring Camden and Hackney, while holding a dominant majority in Haringey.

Islington’s Labour council leader Richard Watts said the party had notched up the best local election results in the capital for more than 30 years.

As well as being the home of party leader and local MP, Jeremy Corbyn, Islington has been cheered by left-wingers for its attempts to build new council housing and for starting its own energy company to help residents struggling with fuel bills hammered out by the Big Six providers. 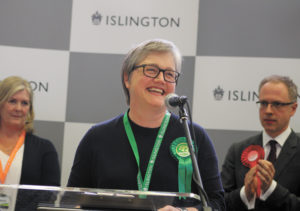 “This is absolutely part of a broader endorsement by the people of Islington for Jeremy and Emily [Thornberry, the shadow foreign secretary and Islington South MP] and their leadership of the party,” said Cllr Watts. Both of the borough’s MPs extended their majority at Theresa May’s snap general election last year.

Cllr Watts, who won back his Tollington ward seat and was re-elected by the party as Town Hall leader, admitted that having Labour’s “popular” national leader Jeremy Corbyn as Islington North MP had helped them retain control and boost their votes.

Cllr Watts said: “If there was any mistake going into the elections it was having some of our supporters having unrealistic expectations of winning boroughs we haven’t won for a very long time. It was always going to take two or three goes.”

He was referring to areas such as West­minster, billed as an authority where Labour could finally win control on a good night. While it did win its first-ever council seat in Soho, Labour would have had to do something it has never done before, under any leader, to take the famously blue central London borough.

The party’s big missed target in London was in Barnet, where recent anti-semitism controversies were widely reported as having had a damaging effect as Jewish voters refused to back the party this time. Cllr Watts said it had not been a significant issue on the doorstep in Islington.

Mr Corbyn, who was at the daytime count on Friday at the Sobell Centre in Holloway, said: “I’m very proud of the results we’ve seen. I was very confident coming here today.

“­We had the best results in London since 1971, which was a seminal year for Labour. We didn’t gain places that we were very unlikely to gain. However, we’ve won wards that have never been Labour before.”

As in 2014, the Greens were the only party to prevent a complete wipeout of the opposition in Islington. Councillor Caroline Russell held her ground in Highbury East, despite claims that Labour had flooded the ward to try to unseat her. Four years ago she had squeezed in by eight votes, but this time she topped the polls in the ward. Labour’s Osh Gantly and Sue Lukes were elected alongside her.

The fourth-placed candidate in the ward, the Greens’ Benali Hamdache, was just 73 votes short of being elected. “It’s the only competitive ward in Islington. We were putting all our resources into Highbury East and I do worry residents in Highbury East have been rather sought-after for their vote,” he said. “The electoral system of first-past-the-post forces parties into those kinds of battles.”

The Green Party also performed well in St George’s ward, with all three candidates receiving more than 1,000 votes each, but not enough to gain further seats in the chamber. Overall, the party’s boroughwide vote decreased.

Another victory would have allowed the Greens to form a “group”, changing their rights to support from the council.

The results have again sparked debate about the way the electoral system works at local level.

The Liberal Democrats, who controlled the council before 2010, saw their vote fall by two per cent from 2014, with their failure to get a councillor seen by Cllr Watts as the “death of the Lib Dems”.

The party had hoped that anti-Brexit feeling could be a springboard for a comeback in the borough, with Labour and Conservatives both refusing to offer a second referendum on the final deal that will divorce the UK from Europe.

Kate Pothalingam, a Liberal Democrat candidate in Highbury East, said in her speech at the count: “While the vote is not what we had hoped for, we will continue to speak out on liberal issues in Islington and ensure your voices are heard.”

Meanwhile, the Women’s Equality Party came fourth in Hillrise ward. Nikki Uppal received more than 800 votes – behind Labour but above the Lib Dems, Conservatives and Greens.

“People are really getting what the party is about and feel like it’s time we did something about equality,” she said. “We spoke to residents on the doorstep who supported shared parenting and issues around childcare.

“We had a really positive reaction from both men and women. We plan to stay active in the community and keep up the momentum.”

Conservatives, who ran a full slate of candidates despite not having control of the council since 1968, drew another blank, with no councillors returned.

Mark Lim, a candidate for Bunhill ward, said: “Naturally, we have a situation where Labour have kept their Arsene Wenger-like grip on Islington Council, but obviously circumstances can change in that particular case.

“However, nationally we feel we’ve done relatively well. The Momentum bandwagon has stalled in many areas of London and we look forward to the future with confidence.”

The next step will be for Cllr Watts to appoint his cabinet, which is expected to be announced in the coming weeks.

The Tribune understands it is likely to remain largely the same.

We needed more time, says party that once held power

THE latest chapter in the rise and fall of the Liberal Democrats in Islington was written on Thursday as the party once again failed to win a seat on a council it controlled less than a decade ago, writes Samantha Booth.

Labour mercilessly declared the result as the “death of the Lib Dems” in the borough, with the party conceding it “needed more time” to rebuild.

Members have sometimes blamed the freefall in Islington on the party’s national coalition with the Conservatives, which was in place when it lost its last remaining councillors in 2014.

At the count on Friday, it was revealed that this time the party received 12 per cent of the overall vote, down 2 per cent since 2014.

Alain Desmier, chairman of the local party, said: “We weren’t under-prepared at all. We could see the votes coming in when we were knocking on doors and speaking to residents. Those conversations just happened too late.

“We could see people visibly thinking about us, speaking to candidates and reading about us. We just needed more time.”

The party’s manifesto in Islington stretched to only 384 words, although on its release members said there was “a virtue in being succinct”.

Mr Desmier said that people had shared some votes with Lib Dems on split ballot papers in target wards such as Barnsbury, St Mary’s and Highbury East, but not enough to see a candidate elected.

He said: “I think the proof will be a by-election or another general election will show we are gaining ground.

The party would act as the “unelected opposition”, he added, still working on residents’ cases for the next four years.

Mr Desmier said: “With Emily Thornberry and Jeremy Corbyn [Islington MPs] knocking on doors with them, we are fighting the heart of Labour here.

“But we’ve got a very clear role to stand up for people that Labour forget about. That will happen and we are going to be there every step of the way.”