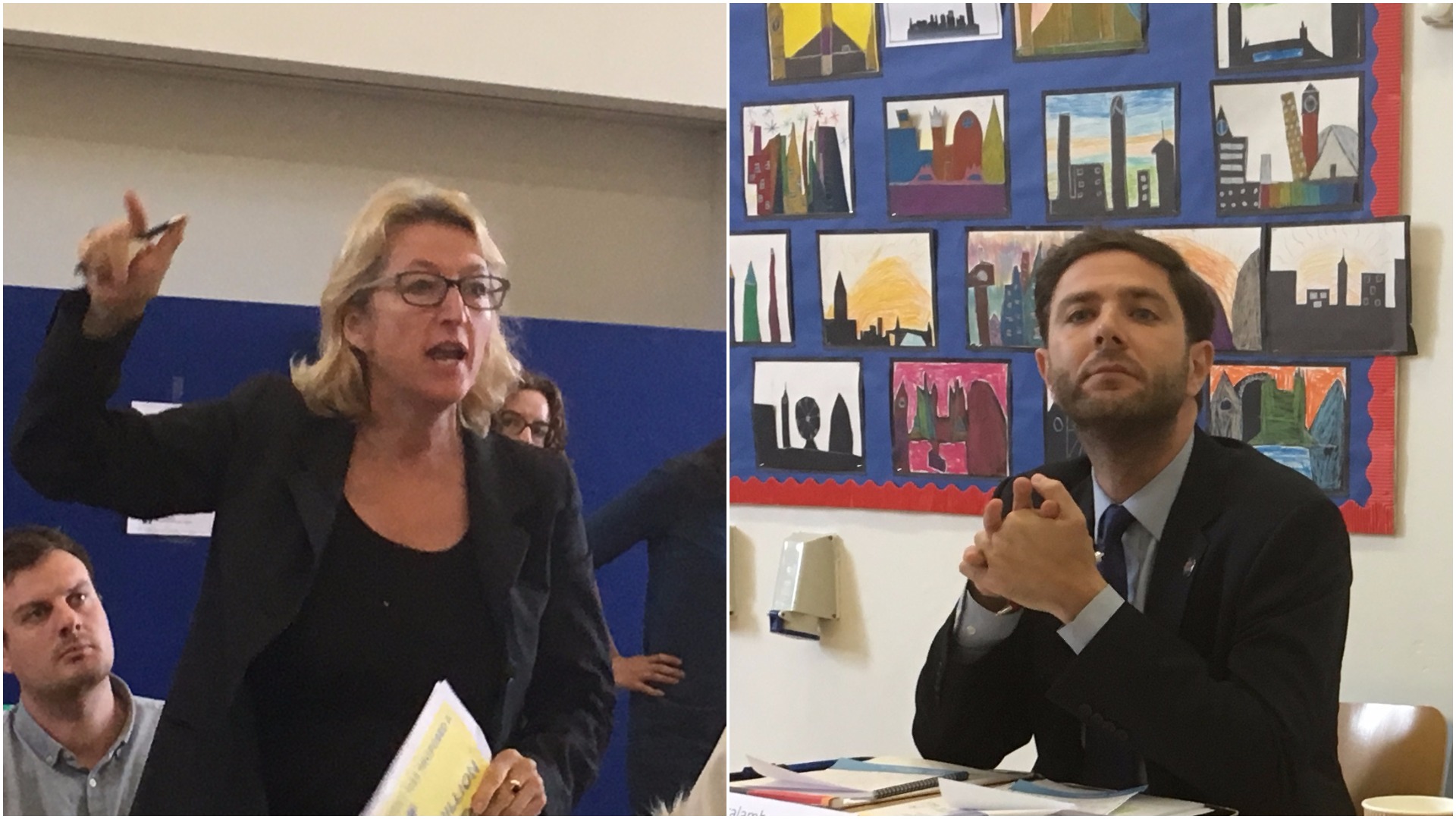 FURIOUS parents gave the Conservative Party parliamentary candidate for Islington South a rough ride at a hustings event on Friday over the Tories’ proposed new funding formula for schools.

Around 60 parents gathered at St Mary Magdalene Academy in Holloway on Friday morning to hear from candidates standing in the constituency about their views on education policy.

The meeting at the Lough Road school became lively during the Q&As when parents raised their concerns with Theresa May’s education policy with Tory hopeful Jason Charalambous.

One parent, Louise James, described the new funding formula as a “poll tax”, adding she was worried about how the policy will affect her child’s school, Laycock Primary School, in nearby Laycock Street.

Addressing Mr Charalambous, she said: “If your policies get through, our children there will have £600 less, per pupil over the next few years. Your sums don’t add up. You’ve backed down in the last few days, because you’ve seen parents organise. Your policies are vague. You’ve not fleshed it out. We do not trust you anymore. This is your poll tax.”

Mr Charalambous replied by urging Ms James her to read the Conservative Party’s manifesto, adding: “Theresa May has listened. She’s heard the calls of parents, that is why the Conservatives are committed and costed £4billion extra funding for schools. I look forward, I don’t look backwards.” 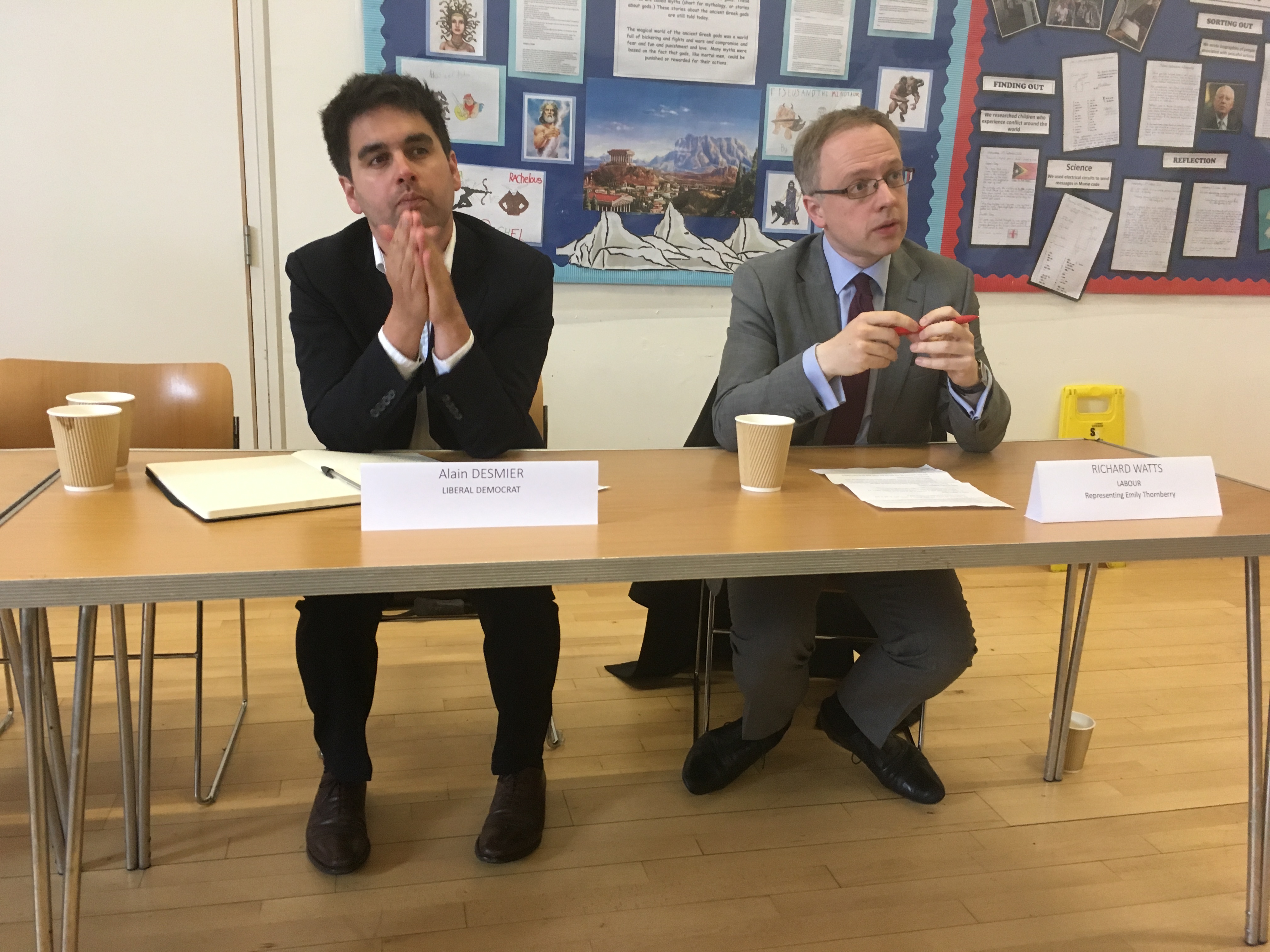 Also taking part in the hustings were the Green Party’s Benali Hamdache and Alain Desmier of the Liberal Democrats. The incumbent, Labour’s Emily Thornberry, was campaigning elsewhere and sent Town Hall leader Richard Watts, as her representative.

Another Islington parent, Kerri Eames, 37, said it was unfair how children of low income parents would receive free school meals while those on working tax credits do not. The government provides money called tax credits for those on low incomes.

“I’m on working tax credits. I’m a low income parent, I go to work, I do what I can, but it’s going to cost me nearly a thousand pounds a year to pay for my son’s school meals in secondary,” she said.

In Islington, all primary aged pupils are entitled to a free school meal but parents of secondary school pupils must earn less than £16,190 and not be on working tax credits to be eligible. Ms Eames said she earns less than the threshold with tax credits.

In response, Mr Charalambous said: “I completely understand the difficulties you and other families face. That’s why the Conservative Party in their fully funded and costed manifesto has committed to free lunches for all primary and secondary children from low income families.”

He added: “The reality is, the Labour manifesto, it’s so easy to make promises in life. There is a £58billion black hole in their manifesto.”

Responding to Ms Eames, Councillor Watts said: “I completely agree with you the current system of allocating school meals, that the Tories want to get back to, is completely unfair. At the moment, free school meals are a benefit for people out of work. Not people who are in work, and that’s not fair and that’s not right.”

He added: “In Islington we have shown that our policy of universal school meals really works.”

The National Union of Teachers (NUT) estimates that by 2019, Islington schools could have £12.5million less a year to spend due to increased pension contributions and changes to national funding allocations – the equivalent of 337 teachers on £37,000-a-year salaries.

One parent, who wished to remain anonymous, told the Tribune after the hustings that her daughter at St Mary Magdalene Academy was asked to purchase her own exercise books as the school could no longer afford them. “It wasn’t like this in my day,” she said.

However, St Mary Mags headteacher Ruth Luzmore has since denied this, saying the school has not asked parents to contribute to the cost of exercise books.