Roads row: We will not back down 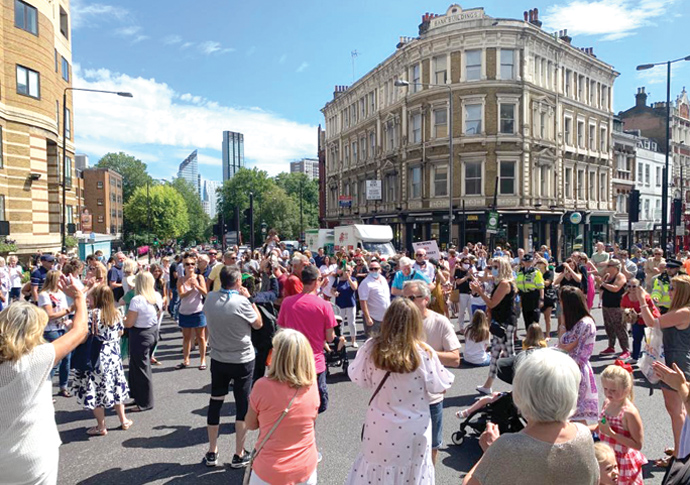 COUNCIL chiefs say they will not back down to the protesters who are now besieging the Town Hall on a weekly basis over their road closure plans.

The two sides in the increasingly fraught showdown over Islington’s People Friendly Streets policy remained at polar opposites this week as a new demonstration stopped the traffic on Wednesday.

And relations looked as if they would sour further, when the ruling Labour leadership suggested the opponents were being coordinated by an “outside group”.

The protests are against Islington’s installation of road-closing bollards, no entry signs and cameras to stop rat-runs.

A third of the borough’s residential streets are due to see new measures introduced. 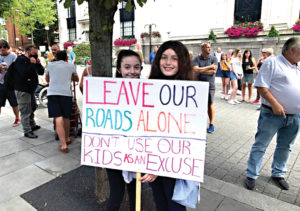 Young demonstrators Charlie and Sammy at the latest roads protest

It is part of a drive to discourage people from returning to their cars following the coronavirus lockdown and promoting walking and cycling as the use of public transport falls.

But protesters say the changes only cause more jams and say they will continue to march on the Town Hall every week until the rollout of People Friendly Streets is halted.

Islington’s environment chief, Labour councillor Rowena Champion, told the Tribune the changes were needed to prepare the borough for September, when an upsurge in passengers wanting to use buses and tube trains again is expected to clash with the reduced capacity on the network.

The Tribune also approached protest organisers to request an interview. 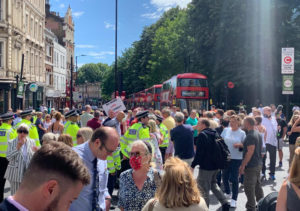 Cllr Champion said: “Obviously we have to listen to everybody, but things aren’t going to go back to the way they were after lockdown ends. Come September many people will want to start using public transport again, but won’t be able to do that. Capacity is greatly reduced, so even if people want to use it they may not be able to.”

She added: “There won’t be a return to crowds of children on buses going to school, as free bus passes have been taken away from them. The only way to get people to work and school is to make the streets safe for them.

“People are entitled to disagree with us about things, but that’s why we’re doing it; to protect Islington residents and make sure they have safe routes to work and school.”

Addressing concerns from protesters that emergency services were not listened to before work started, Cllr Champion said: “Because of these ongoing discussions we’ve removed bollards in Wharf Road and will replace them with cameras. 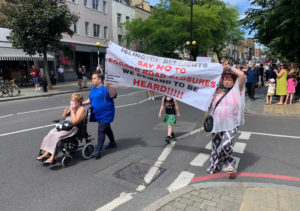 “There are also changes to our original plans for Elizabeth Avenue. That shows we are flexible. We have agreed to monitor the situation with emergency services, and of course we will continue to do that.”

Council leader Richard Watts said he had been “pleasantly surprised” by how many people had contacted him to express support for the scheme.

“The protests on Upper Street are being coordinated by an outside group and many of the attendees aren’t Islington residents,” he said.

“I welcome that in shutting off the streets to traffic they’re showing how nice traffic free streets can be. The group are refusing to meet with the council or have any reasonable discussion. They apparently don’t believe in negotiation. Fair enough, but that means there’s nothing we can do with them. We will continue to listen to all residents but we will not give in to this.”

Demonstrators on the marches have each week reacted angrily to the suggestion that the protests are being controlled by people who do not live in the borough, and say residents here are adversely affected. 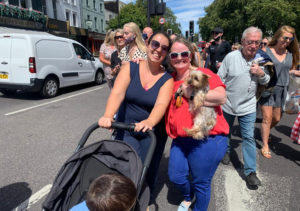 Opponents say there should have been a consultation survey before the road map was changed.

The campaign’s demands include the removal of barriers, the removal of signs, no camera enforcement and a reversal of the scheme in St Peter’s ward. The protesters have already said they will not back down or meet with anyone from the council until their demands are met.

The scheme is being rolled out using 18-month experimental traffic orders, with a consultation planned in 12 months’ time on whether to keep the changes.

“We can’t meet the demands of the protesters,” Cllr Champion added. “I genuinely believe that we have to do what we are doing. We will not back down or change course on this.

“In 12 months we will open a consultation on the changes already in place. The decision absolutely has not already been made, it will be a consultation in the traditional sense.” 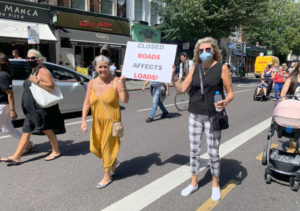 PROTESTERS fighting road changes brought traffic to a standstill as they marched down Upper Street for the third week in a row, writes Calum Fraser.

The latest demonstration unfolded on Wednesday, leaving buses and cars backed up in queues as a protest march stopped at the Angel junction.

Aideen O’Shea, who lives in Grantbridge Street off Essex Road, said the road closures where “ridiculous”. Her daughter lives in Wharf Road with her two grandchildren.

Ms O’Shea said: “It used to take her five minutes to drop off the kids. Now they have closed Wharf Road so she has to drive all the way up City Road and Angel to get here.

“Instead of being in the car for five minutes, she’s in it for 40 minutes in traffic.”

One of the group’s organisers, Jody Graber, told the crowd: “The council wants the working class lot booted out and they want the borough to be taken over by the La-di-da lot. But it’s not happening on my watch.”