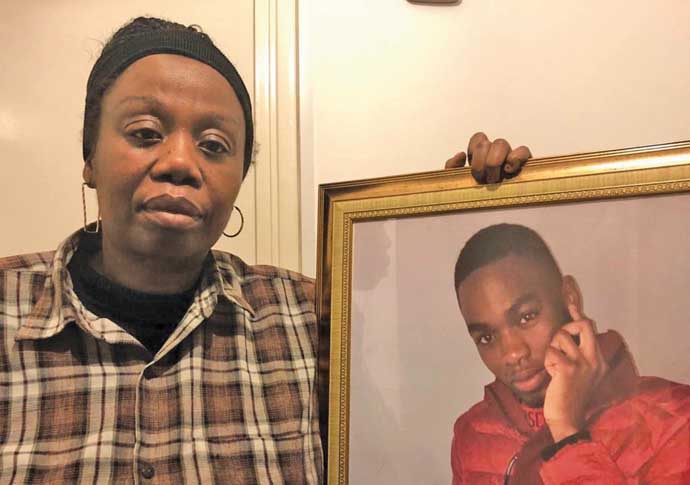 Susan Anim-Boadu, holding a picture of son Kwasi, is searching for justice

A DETECTIVE has told a coroner’s inquest that police had “exhausted all lines of inquiry” into the unsolved murder of a man stabbed outside a house party.

Kwasi Anim-Boadu, 20, was killed in a knife-attack in Roth Walk on the Andover estate just after 3am on April 21, 2018, but nobody has been brought to court to face charges.

Two men said to be at the scene were asked to answer questions at the hearing yesterday (Thursday) at St Pancras Coroner’s Court.

One, Jason Abraham, refused to take part in the inquest, and the other, Brayan Tchenda, said he himself had been stabbed during the incident.

Kwasi’s family say they are devastated that nobody has been convicted over the killing and have urged police to inject more interest into the investigation.

In court, his mother Susan Anim-Boadu asked to see the CCTV footage covering the minutes before the attack, a request which she said had previously been refused. 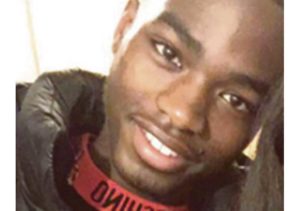 Detective Chief Inspector Richard Leonard said: “At the time, it had ­evidentiary value and unidentified individuals in it but as we’ve exhausted all lines of inquiry I am happy to show her the CCTV.”

In evidence, he told the inquest, via videolink: “Witnesses that can give us the exact set of circumstances that caused him to be stabbed won’t come forward.”

He added: “We are no further along in our investigation because we can’t prove beyond reasonable doubt that Mr Abraham is responsible for Kwasi’s murder.”

The actual moment of the stabbing is not caught on CCTV, DCI Leonard said.

Mr Abraham, who is in prison in relation to another case, had refused to leave his cell to take part in the inquest, the court was told.

DCI Leonard said it was believed that Kwasi had become involved in an altercation after people started leaving the house party; a noise complaint had led council officers to ask for the music to be turned down.

“The young ladies who threw the party didn’t see what happened as they came out just after Kwasi had been stabbed, and they have given a statement,” said DCI Leonard.

“But there were also other individuals present, some of which are Kwasi’s friends and they will not provide statements to us.”

Mr Tchenda, appeared at the hearing via videolink, and took questions from the coroner Mary Hassell and Kwasi’s mother and aunt.

He said he was injured during the incident, adding: “I tried to break up a fight between two people and he [Kwasi] wasn’t one of them. I was stabbed in the leg and forearm.”

Mr Tchenda said he had not seen Kwasi stabbed but told the court he did not want to answer questions about whether he knew the people who were involved.

“I’ve given every bit of evidence I could to the police,” he said.

Mr Tchenda told the court that he “didn’t personally know” Kwasi and that “police told me his name afterwards”.

Kwasi had also been known among friends by the nickname “Lavish” and “Junior”.

DCI Leonard said that Mr Abraham had given a no comment interview after handing himself in a few days after Kwasi’s death.

He has not been charged with any wrong-doing in relation to Kwasi’s death.

The detective told the inquest that their theory was that Kwasi was killed by a blade he had brought to the scene as in the CCTV he is seen carrying an unidentified item.

But he said: “I can’t definitively say that. That weapon has never been recovered.” 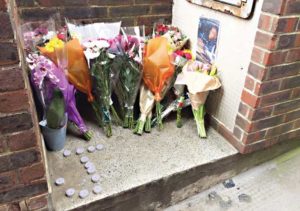 Flowers left at the scene on the Andover estate

Partygoers and friends of Kwasi tried to stop the bleeding before police officers, paramedics and then an anaesthetist from the London Air Ambulance arrived and took over attempts to revive him. But he was pronounced dead at the scene.

A post mortem carried out by forensic pathologist Simon Morris Poole found Kwasi had died from blood loss and respiratory failure after being stabbed multiple times.

A toxicology report found he was not drunk or under the influence of drugs at the time of his death.

Ms Hassell said: “I am sorry we’re in this court. This hearing belongs in the Crown Court with defendants with the aim of finding out who killed Kwasi. I waited a long time to have this hearing in the hope there would be a prosecution.”

Kwasi, who has been described by his family as “funny” and “popular” was a former pupil of St Patrick’s Primary School in Kentish Town and an altar boy at Our Lady Help of Christians Church, in Lady Margaret Road.

His family, from Camden Town, have campaigned to end youth violence and were part of the successful campaign to get knife amnesty bins installed.

After the hearing, Ms Anim-Boadu said: “I’m not happy with how the police have handled the case.

“I’ve been asking for two years to see the CCTV video. Why haven’t they let me see it? They told me they had found evidence linking one of the boys with ­Kwasi’s murder and then they say that’s not true.

“They are constantly changing the story.”

‘Screens in the park?’ Battle is on to save rec’s monkey bars
From the Camden New Journal