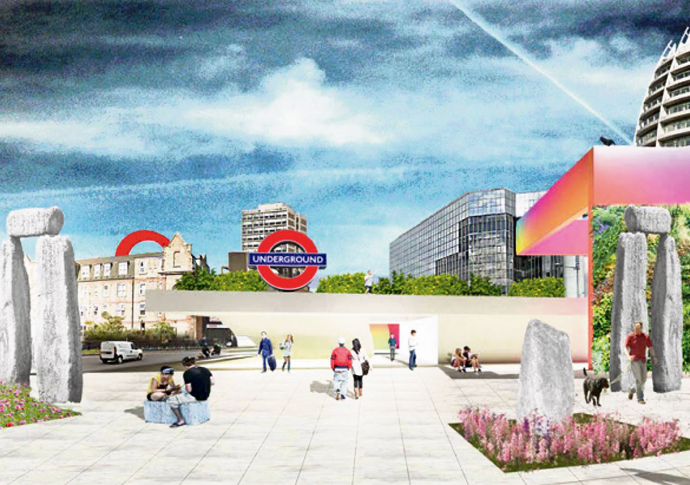 PLANS for one of the country’s tallest buildings are among the 39 design ideas to renovate Old Street’s roundabout.

Transport for London (TfL), working with Islington and Hackney councils, propose to remove the 1960s roundabout by closing the north-west arm to traffic as well as creating cycle lanes in a bid to make it safer for pedestrians and cyclists.

After receiving 120 registrations of interest since December, Islington Council released a long-list of architects’ designs to be built on the Old Street “Iconic Gateway”, which had to embrace the “Tech City” theme.

A “landmark” tower, approximately 230 metres tall, thought up by Clerkenwell-based Mae architects could sit on the new peninsula, making it one of Britain’s highest – overshadowed by the Shard, One Canada Square and equal level to the Heron Tower. The “Tech Tower Park” would have 10 layers, six storeys apart, creating a vertical park including botanical gardens for pharmaceutical research, a games area and rooftop green space. 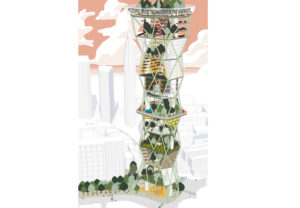 An illustration of the ‘landmark’ tower proposal put forward by Clerkenwell-based Mae architects, which would be approximately 230 metres tall. Image: Mae

Another radical idea is creating a Stonehenge-type design of stones around the tube entrance and installing giant screens to show adverts, films and digital arts and shows, as well as removing the current arches.

In their proposal, D*Haus Company, based in Crouch Hill, said: “The stone circle would not just naturally signify the meeting place but become a defensive ring around the tube entrance against bad driving or other hazards.”

The redesigned site could also be home to an open-air library, as proposed by Es Devlin Studio and Google Arts and Culture who worked together on The Singing Tree at the V&A Museum. Any book would be available to read either on personal phones or on LED displays within the sculpture.

All designs must be deliverable within a budget of around £1million, but can exceed that figure if design teams show they have viable external funding. 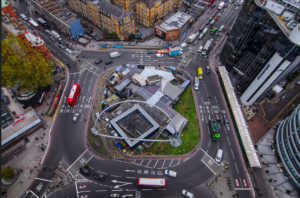 Work is expected to begin on the roundabout later this year, with TfL currently designing their plans to be submitted to the council in the spring.

The public are now being invited to give their feedback on their favourite design before a judging panel, including council members, business leaders and architects, decides on a shortlist due to be announced in late March.

Islington environment chief, Councillor Claudia Webbe, who will sit on the judging panel, said: “Old Street is an iconic location, and its transformation will hugely improve the area for pedestrians, public transport users, cyclists and people who live and work nearby.

“We have had huge interest in our design open call, and the public exhibition is a chance to have your say on the creation of an exciting, bold, iconic gateway – 39 innovative and inspiring ideas set out in one place, so you can help to shape the future of Old Street.”

London’s Walking and Cycling Commissioner, Will Norman, also a panel member, said: “This transformation is going to make Old Street a more pleasant and safer place for all pedestrians and cyclists. It’s an area that is renowned for innovation so I’m really looking forward to seeing the range of ideas shortlisted and hearing Londoners’ opinions about them.”

The public exhibition will last until March 2 on weekdays between noon and 6pm on the first floor of building 3 at 2-4 Old Street Yard, behind the White Collar Factor.

To view all the designs online and vote, visit www.islington.gov.uk/oldstreet