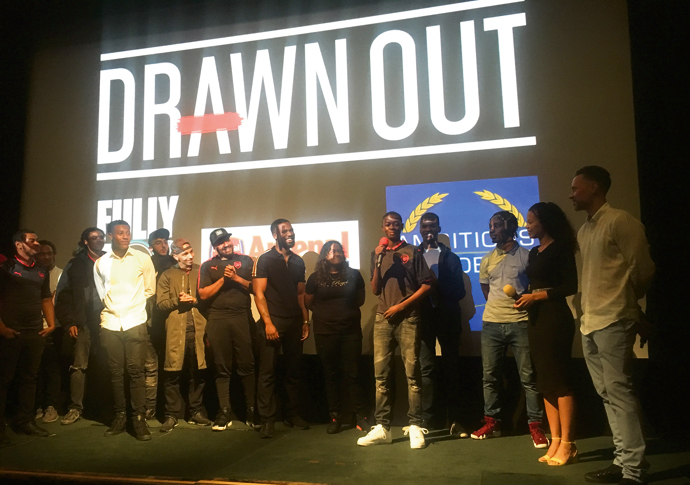 The cast of Drawn Out, and those who were involved in its production, at the film’s Regent Street premiere

THE star of a new film about gang culture set in Archway has criticised the stereotype of “hellhole” housing estates, saying that the film’s location off Holloway Road is more like one big “family”.

Actor Joshua Blissett plays leading character Jacob in Drawn Out, which follows the journey of a young man in search of a better life.

Mr Blissett spoke out about his experiences of life in Islington at the film’s premiere, held at Regent Street cinema last week. The screening was followed by a Q&A with audience members who praised the creativity and emotion shown by the young actors.

Fifteen young people from the Elthorne estate knuckled down for a year to create the short film, which includes scenes shot outside their homes, near Pentonville Prison in Caledonian Road and Arsenal Football Club’s Emirates Stadium.

The filmmakers hope it will offer a new narrative for people growing up on estates and show there are other ways to live than being “drawn out” to gangs and crime.

Since working on the film Mr Blissett, 22, has landed a leading role in the Channel 4 series Top Boy. 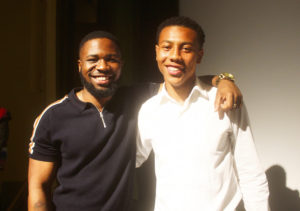 He said: “The mainstream media portrays estates like hellholes but Elthorne is a family. Fully Focused and Ambitious Academy are gems – I’ve never seen projects like that before. Everyone was so cohesive. I hope that other boroughs can take inspiration from us. The message of the film shows it is never too late – the more sad the situation, the better the comeback so just persevere.”

The project, which has been viewed nearly 900,000 times on YouTube, was carried out in collaboration with Arsenal in the Community and the youth mentoring programme, Ambitious Academy. It was produced by Fully Focused Productions, a youth-led media organisation.

Seventeen-year-old Jordan Aloye, from the Elthorne Estate, who plays the role of Sean in the film, said: “It all began one year ago and since then we have been pushing ideas forward with the aim of portraying reality, real life situations. The message is to not be too proud to be yourself and do not get drawn out.”

Alongside the debut acting performances, the film includes performances by Ashley Walters, renowned for his outstanding performances in Top Boy and Bulletproof, and Percelle Ascott from the Netflix series The Innocents.

Teddy Nygh, the director and co-founder of Fully Focused Productions, said: “Today is monumental. The film is full of passion and has an important message – a harsh message – to reach out to people in a harsh environment. To do that you have to cut through with something raw. But also the film offers hope – this is a community project where everyone got involved.”

Shawdon Smith, who grew up on the Elthorne Estate before starting the Ambitious Academy, said: “Our estate is on the big screen now. They can see they can do something else. I’m proud of everyone that got involved. We are a family now.

“Growing up on an estate like ours, it’s been an ambition to do something different. Hopefully this will resonate with people going through a similar situation.”