After a fowl start, battery hens settle in a caring new home 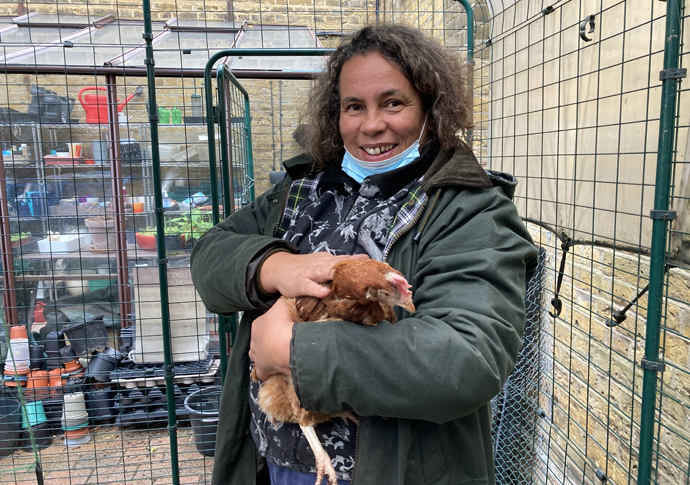 ‘Look at them now!’ Samantha Lewis with one of the newly confident chickens

SOME exhausted factory farm animals have bounced back after finding sanctuary in a community centre garden.

The chickens had been rescued from battery sheds by the British Hen Welfare Trust (BHWT), who gifted Ms Lewis the birds.

While in the battery shed, the hens suffered appalling conditions. “They didn’t have any feathers,” Ms Lewis said. “They kept them in cages in the dark, and they were fed automatically, it was just about harvesting their eggs.”

The birds arrived at the Trust in November in a small cardboard box. “They were all small scrawny things with no feathers. They were so scared because they hadn’t had interaction with human beings before.” Ms Lewis said. “Now look at them!”

A few months on and the birds are looking much healthier, and have grown more confident. “They’re different birds now, you can see their feathers have grown back. And now they realise we’re human beings and we come to feed them and be nice to them,” she said.

The birds, who used to hide from Ms Lewis, now peck at her feet. “See how brave they are now, they’ve got characters. They’re confident, they’re chatting,” she said.

The hens have enjoyed much better conditions since their arrival. “They get fresh veg and chicken feed, grit, fresh water,” Ms Lewis said.

The vegetables come from the community centre’s garden, which Ms Lewis cares for with the help of local children and older or vulnerable residents.

Although the birds don’t yet have names, the centre plans to run a “naming competition” with local children soon.

A lot of the children within the Trust’s area of benefit live in flats without outdoor space. They love handling the chickens, Ms Lewis said, and have grown confident enough to hold them.

“They’re getting used to it, I want them to be able to handle [the chickens],” said Ms Lewis. “One of the young boys in my group, he’s really good at picking them up.”

For children growing up in densely populated, urban areas, coming into contact with live animals is a vital life lesson.

“It’s important for the children to get an understanding of wild creatures,” Ms Lewis said. Engaging with animals is a sure-fire way to get kids interested in nature.

“The whole objective is not only connecting people with nature but making them understand about climate change and thinking about different ways that we can do our little bit,” Ms Lewis said.

Any children within St Luke’s area of benefit can turn up to help with the chickens or the garden.