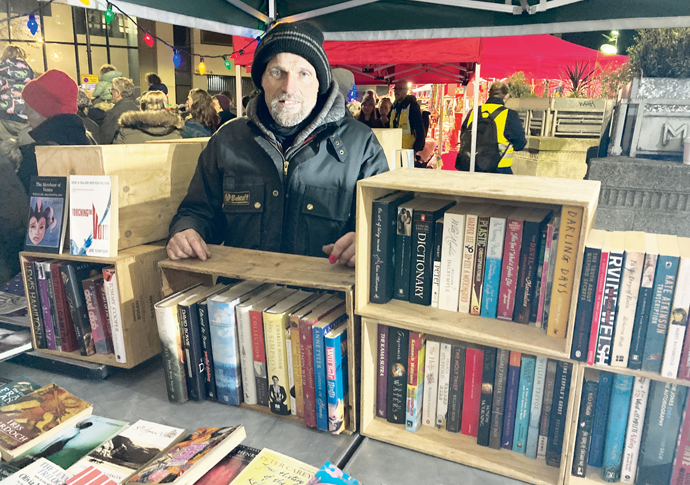 Jonathan Privett: ‘When [Covid] started I thought: I can play my part, as a bookseller, I’m an essential key worker, I have a key role to play in people’s mental health’

A BOOKSELLER wants his stall to be considered “essential” in the event of another Covid lockdown.

Jonathan Privett, 56, who is Archway Market’s first and longest-serving stallholder, has been selling books since he was in his 20s.

“There’s an older generation of people here that you don’t always see in central London. There’s a gentleman who comes every week and chooses books and he’s told me he’s 100 years old. He says he has to read faster because he doesn’t have much time left,” Mr Privett said.

“There’s a lot of people living in extreme poverty in Archway who come to me for books. Reading isn’t just for middle-class people, much as middle-class people like to think it is. They love books by George Orwell and Noam Chomsky. They’re after explanations for the inequalities they’re experiencing.”

Mr Privett tries to keep his stall affordable, with most books going for under £5.

“Bookshops in markets are quite rare and often sell whatever’s cheap and rubbish. To have a curated selection of books is quite a rare thing,” he said.

The stand was so successful that in 2011 Mr Privett opened Word on the Water, a floating bookshop based on a Dutch barge, moored near Coal Drops Yard.

“I didn’t want to abandon Archway,” Mr Privett said. “My customers at Archway had become quite loyal, I’d become fond of the area and I ­didn’t want to deprive it of something I consider essential. I’m still shocked there’s no bookshop in Archway.”

During the last two lockdowns Mr Privett became “frustrated” that he could not sell at the outdoor market.

“When [Covid] started I thought: I can play my part, as a bookseller, I’m an essential key worker, I have a key role to play in people’s mental health,” he said.

“Most European countries – Italy, Spain, France – included books as essential, but Britain didn’t. So I had to close the stall for long periods, even though it was outdoors and I was selling an essential product,” Mr Privett said.

For Mr Privett, access to books was just as important as access to health care during the lockdowns.

“If I thought being a doctor was more important than being a bookseller, I would have become a doctor. I felt [selling books] was a really worthwhile way to spend my life. It was a calling: people in the trade often have very long careers,” he said.

“During the lockdowns, people came to crave books. They finally had enough screen time to realise they wanted something else. There’s been a fantastic comeback for books since lockdown – people are stockpiling books in case there’s another lockdown.”

He added: “My message [to Boris Johnson] would be: don’t close bookshops again. If we’ve learned anything from the last two years, it’s that we should’ve been able to refine our ideas of what’s essential.”