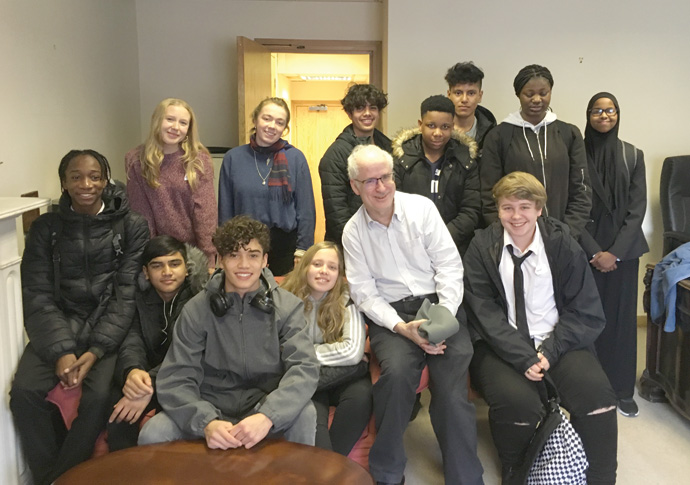 The Islington teenagers who took part in the research project, pictured with Professor Sir Simon Wessely at the Royal Society for Medicine

A MENTAL health initiative based in Tufnell Park has been looking into the impact of social media on young people’s minds.

The Mental Health Collective worked with youngsters from Archway asking the question: are young people turning into zombies, or is it a moral panic? The project findings will be launched on Sunday with a film screening at Crouch End Picturehouse.

Amy Pollard, founder of the Mental Health Collective, said: “If you go right back to the time of Socrates, there have been concerns in society about technology. People were concerned about children learning to read and write centuries ago. There have always been concerns about changes of power.”

A group of 34 young people aged 14 to 16 joined the Mental Health Collective while on work experience and took part in a research project, holding focus groups and workshops to form their body of research.

“They have been reflecting on their lives and thinking about ways to help shape how technology is used next,” said Ms Pollard. “The young people said they would want it to be used in a context of less judgment and more equality. Young people feel concerned about knife crime and stress at school. The key thing we found is that all these things are connected and they run across the internet and everyday life.”

As part of their research, the youngsters visited Professor Simon Wessely at the Royal Society for Medicine, a consultant psychiatrist at King’s College Hospital.

“He said he didn’t think it was for his generation to give an answer to what the relationship is between mental health and technology,” said Ms Pollard.

There have been growing concerns about social media use among young people, with senior medical advisors publishing guidelines last month. They advised parents to ban phones from the bedroom at night and from the table at meal times.

A report said that, while there have been studies linking excessive time on social media to increased mental health issues, it is not clear that using the technology is inherently harmful.

Ms Pollard said: “Right now issues are still emerging about our relationships with each other and as a society. Social media is used as a way to build relationships with each other. People may appear zoned out but consciously they are making decisions and making a choice to connect online. We know perfectly well that people aren’t turning into zombies and are still alive and awake in the room. What we need to do is not have a panic but have a conversation.”

The launch of the study will be held at Crouch End Picturehouse on Sunday from 11am to 12pm. It is free and open to everyone.