Blind are put at risk by ‘cyclists cutting Corner’ 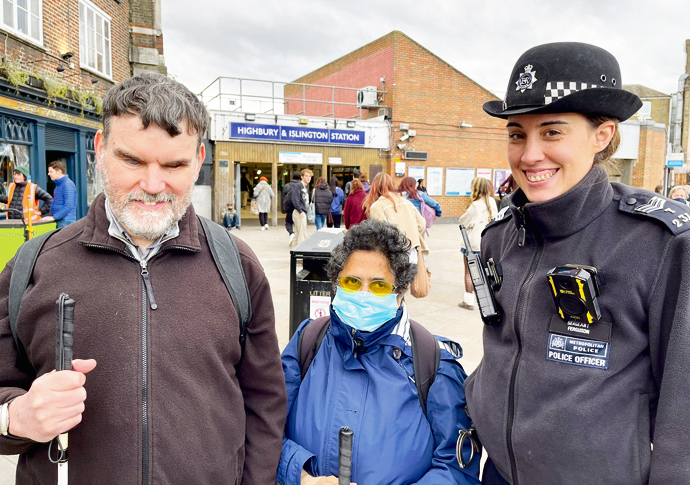 Andrew Hodgson, president of the National Federation of the Blind UK (NFBUK), with NFBUK volunteer Devaki Sivasubramanian and Sgt Ferguson at a police bike-marking event

THE transformation of Highbury Corner has left the area impossible to navigate for those who are blind, it was claimed this week.

A new layout for the old roundabout was introduced in 2019 with segregated cycle lanes on three sides.

But there are warnings that cyclists and electric scooter riders are not always using them, and are simply cutting across a new pedestrianised area outside the Famous Cock Tavern and McDonald’s instead.

Deborah Persaud, a blind civil servant from the Newington Green area, has travelled from Highbury and Islington Station to work for 25 years. She said: “They’re putting everybody else at risk so that they can save a couple of seconds.

“The remodelling of Highbury Corner has been a complete disaster. It is so dangerous. Every time I go out there, I am frightened.”

She said the dangers had re-appeared as Covid restrictions softened and more people went out and about.

“Since we started going back to the office in March, I have never been able to cross the road or go into or out of the station without being intimidated by cyclists or e-scooters,” she said. “I have not had a clear run.”

Once, a cyclist collided with Ms Persaud as she was crossing the road near the station.

“It was my right of way, I was crossing safely on a green man.” she said. “A cyclist hit my cane and ripped it out of my hand because they were cutting across in front of me. My cane got caught between the wheels and got snapped into several pieces.This was in the middle of the road, so cars are then oncoming and I’m standing there with no cane.”

She added: “It was all on CCTV, but police just sent me an email a couple of days later saying: ‘We’ve reviewed it and we’re not going to prosecute’.”

The new layout was opened by London Mayor Sadiq Khan after work with Transport for London (TfL) and Islington Council.

At the time, Mr Khan said: “The transformation of Highbury Corner will make the area safer for everyone.”

But Ms Persaud said: “They need to rethink it. I don’t say this lightly, and this isn’t an overreaction. They need to rebuild it, they need to put some control measures in, at least to slow down and direct cyclists.”

Martin Hodgson, president of the National Federation of the Blind UK (NFBUK), said: “Outside Highbury and Islington station is a key point where cyclists are meant to dismount, but tend not to. People do cycle on the pavement and through red lights and that is disastrous for us.”

Helen Cansick, TfL’s head of healthy streets delivery, said: “We’re very sorry to hear about the experiences of the local resident and we’d like to thank her for raising her concerns. The public space in front of the station is for people on foot only and we are looking at how we can ensure greater compliance with the rules, including through more enforcement and improved signage.

“We would like to remind people travelling through the area to be mindful of the needs of others and to not cycle in the pedestrianised area.”