Calvin: ‘My daughter thought I lived in a hospital’ 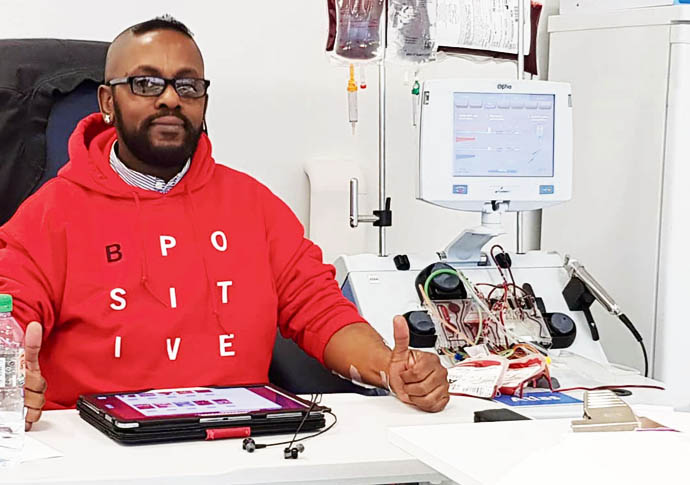 A SICKLE cell disorder patient who has been in and out of hospital for more than 50 years has urged black donors to give blood at an event tomorrow (Saturday).

Calvin Campbell told the Tribune: “I have been in pain every day of my life since I was born.

“Until my daughter was six, she didn’t realise that I lived in the same house as her because I was always in hospital and she thought that was where I lived.”

Fifty-seven-year-old Mr Campbell is among around 15,000 people affected by the illness in the UK. He relies on regular blood donations to enjoy his work and family life and has received treatment since he was just six months old.

People with sickle cell disorder produce misshapen red blood cells which do not live as long as healthy cells. They also stick together more easily, increasing the risk of blocked blood vessels, strokes and infections.

It is more common among people of African or Caribbean descent, and those living with sickle cell disorder need blood donations that are closely matched to their own blood type.

Mr Campbell said: “People don’t realise blood has to be type-specific and race-specific. Like organs, it has to be a 99.9 per cent match.”

Black people are 10 times more likely to have the “Ro” blood sub-type than those from any other ethnic background. It is important to match Ro patients with Ro donors.

For many sickle cell patients the best match will come from a blood donor of the same ethnic background, but while the number of black blood donors in the UK is increasing, there is still a shortage.

“There’s a reluctance and a stigma within the community when it comes to donating blood,” said Mr Campbell, adding that he thought this was partly due to misinformation, religious beliefs and historical misgivings about the NHS.

At one point Mr Campbell developed sickle cell ulcers which lasted for almost 11 years. He lost all the skin and a lot of the flesh below his knees.

“It looked as though I’d been dipped in sulphuric acid,” he said.

Before he started a blood exchange programme, Mr Campbell was spending around eight months a year in hospital.

“It’s enabled me to have a regular life,” said Mr Campbell. “Before Covid, I travelled for the first time in my life. I’m a tenor in the B Positive Choir. We got to travel to Denmark, Boston and Las Vegas.”

The B Positive Choir aims to raise awareness of sickle cell disorder.

Mr Campbell, who is an events and outreach officer for NHS Blood and Transplant, also chairs Red Cells R Us, a not-for-profit organisation supporting those who live with sickle cell and thalassaemia.

“I am trying to show people that the fact you donate blood, the fact you’re keeping me alive and with my family, I have to get up every day and make a difference. Having blood allows me to do that,” he said.

Mr Campbell will attend the Bonded by Blood event at the Resource for London Centre in Holloway tomorrow (Saturday).

“Sickle cell is the UK’s largest-growing genetically inherited disorder. I guarantee you, you know someone or have sat next to someone with sickle cell.”