Clash of the traffic protests outside Town Hall 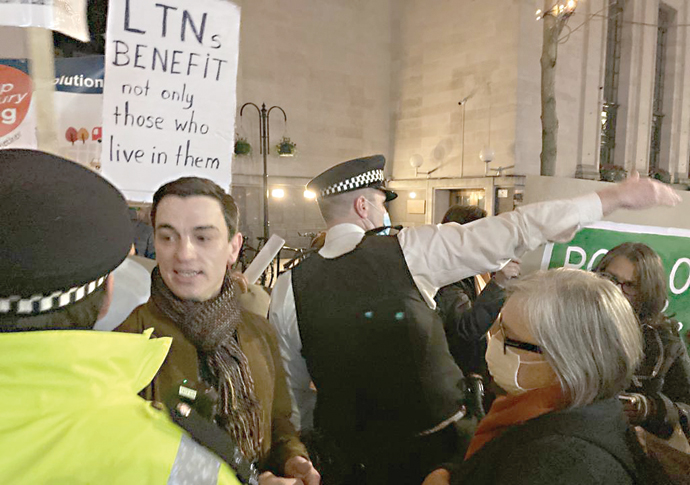 Scenes outside the Town Hall

THERE were chaotic scenes on the steps of the Town Hall last night (Thursday) as a series of different protest groups held demonstrations before the last full council meeting of the year.

And with Islington facing new calls to scrap its Low Traffic Neighbourhoods (LTN) policy of road closures and traffic calming measures, there was a clash between those who support the strategy – and those who hate it.

They faced off, while the drums of a demon­stration against the Edmonton incinerator continued nearby. Police stood in close attendance, occasionally stepping in between the different LTN protests as voices grew angry.

Jody Graber, one of the chief campaigners against the closures, approached Green councillor Caroline Russell whether she would support a referendum on the policy.

A crowd rushed to hear the exchange with tensions fraying as protesters faced off from across the divide.

At the foot of the Town Hall steps, speeches were delivered by members of the anti-LTN camp, including Conservative councillor Rakhia Ismail, a former mayor of Islington who later in the evening put a motion to the chamber to repeal all LTNs in the borough.

It was voted down by the ruling Labour group, which holds a powerful majority in the council chamber. Protesters standing outside had logged into the live stream and “boos” could be heard from within the chamber as the LTNs were discussed.

The issue is expected to be one of the clear battle lines at next May’s council elections.

Labour council chiefs say the LTNs are needed to make life easier for people trying to switch to cycling and walking, while the traffic orders, they say, would lead to cleaner air and reduced rat-running in residential streets.

Opponents say the closures simply funnel traffic into main roads, which then become gridlocked. Critics have included businesses who say they are struggling with deliveries, cab drivers who argue passengers spend their time in jams and some disabilities campaigners who worry about access.

A new LTN is, however, being planned for the Upper Street area.