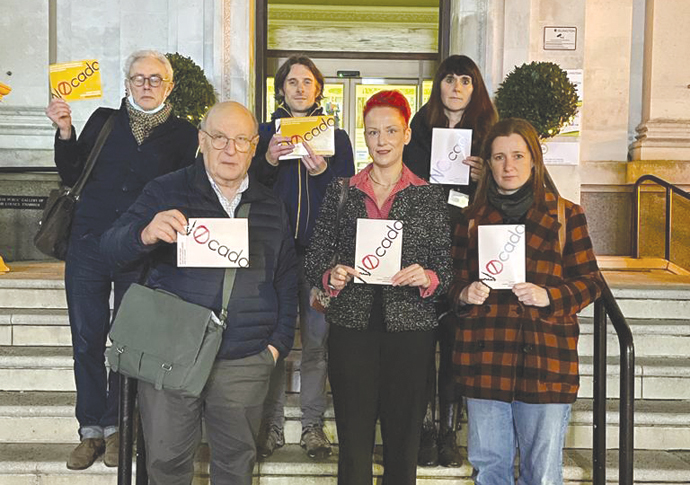 NOcado campaigners outside the Town Hall on Tuesday

CAMPAIGNERS who have waged a long battle to stop Ocado from opening a new distribution depot have accused the retail giant of “drip-feeding” planning applications to the Town Hall and avoiding scrutiny.

The meeting took place in what committee chair Councillor Martin Klute has described as an “unusual legal context” – with Ocado going straight to an appeal.

This meant the council was not actually voting on whether or not to allow the substation, and were indicating what they would have done.

The Ocado Group did not attend the council meeting. Four objectors spoke out against the substation.

Junction ward councillor Sheila Chapman described the application as “a stepping stone towards Ocado’s ultimate goal of establishing a 24-hour-a-day, seven-day-a-week distribution hub right next to a school without having to go through the rigorous process of obtaining full planning permission”.

Andy Grieve, a campaigner from NOcado, said the company was “drip-feeding applications in one-by-one,” adding the substation was “yet another attempt by Ocado to force [the committee’s] hand and make it seem like this site is a fait accompli.”

Mr Grieve also pointed out that the Ocado Group had failed to explain the purpose of the latest plan.

“What is the substation for anyway? Nowhere in this application do they actually tell you what it’s for,” Mr Grieve said.

Cllr Klute said the committee had to review each application “on its own merits for what it is, not for what it might one day come to be a part of”.

And members later voted in favour of the substation application, indicating that it would have approved the proposal if it had been brought in full before the panel.

In the lead-up to the vote, several councillors registered their disappointment with Ocado for failing to attend the meeting, with Councillor Jason Jackson saying it was hard to vote without being able to ask the company questions.

Mr Grieve said Ocado’s failure to turn up “speaks to their complete and utter arrogance, and frankly contempt and disdain for the community”.

An Ocado spokesperson said: “Our proposals for the Bush Industrial Estate are to build the greenest and quietest grocery facility in the UK with a 100 per cent electric van fleet, while creating 250 jobs for the local economy.

“We remain committed to the Islington community, where we delivered to one in six households in 2020.

“We will continue to look at how we can deliver an even better service to the borough while also significantly reducing our emissions.”