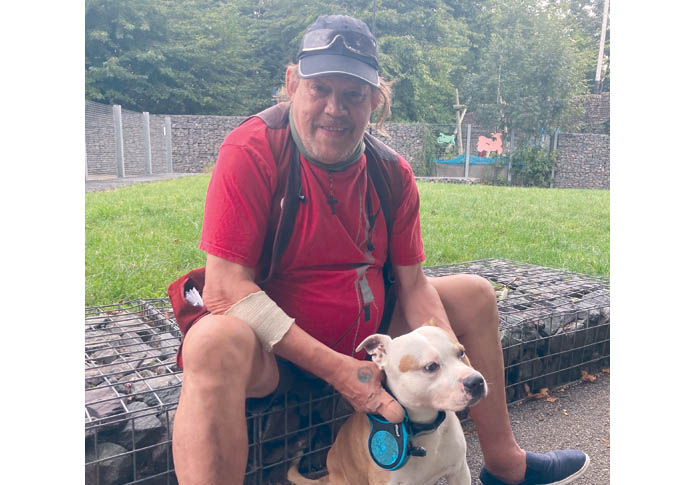 Mr Bailey with his own dog, Smudge

A MAN who was injured in a dog attack has had his finger amputated.

AJ Bailey who lives in Earlsferry Way, says he was in Bingfield Park walking his Staffie dog Smudge when the incident happened in March.

He had his forefinger on his right hand amputated last week in hospital.

“At the end of the day I don’t expect to come to my local park and for this to happen,” Mr Bailey said. “It has been six months and the doctors said I will be in pain for another year.

“I’m not a happy chappy about it at all.”

The council is leading a £1.6million “We Are Cally” project to revamp the area but Mr Bailey argues some of the funding should be used to make the park safer.

He said: “If they are going to spend that money doing a refurbishment why the hell can’t they spend a few thousand on CCTV?”

About the dog he says attacked him – a suspected bull mastiff – Mr Bailey added: “I want the owners to put a muzzle on the bloody thing. I am going to give them an opportunity to come and apologise to me.” 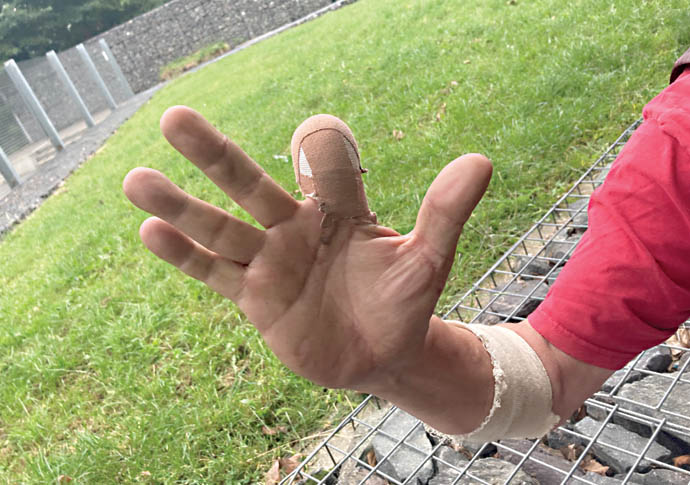 Mr Bailey’s hand after the op

He added: “I have to say thanks to my friends in the area who say hello and ask how I am and my friends Trish and Karen for looking after Smudge whilst I was in hospital. That’s really helped.”

The Met Police said it was called to an attack in March and advised Mr Bailey to go to hospital for treatment.

It added in a statement: “Attempts were made in the subsequent days to contact the man to arrange a visit by officers, however he could not be reached immediately. He was subsequently spoken to by a number of officers via telephone.

“Enquiries later re­vealed that no CCTV of the incident had been captured. The case has been closed and the victim informed.”

Islington Council said its own tenants need permission to keep a dog in their home, and sign a Responsible Dog Owner’s Agreement as part of their tenancy conditions. It is also a legal requirement for all pet owners to get dogs microchipped.

An Islington Council spokesperson said: “We are very sorry to hear of Mr Bailey’s recent surgery. We regularly give police access to our CCTV footage but unfortunately on this occasion they were unable to identify the dog’s owner.

“There are no plans to install CCTV cameras in Bingfield Park as part of the proposed park improvement, though the project does aim to create a good-quality, well-used park providing natural surveillance that will deter anti-social behaviour.

“In addition, we encourage dog owners to act responsibly when exercising their pets in our parks and green spaces.”