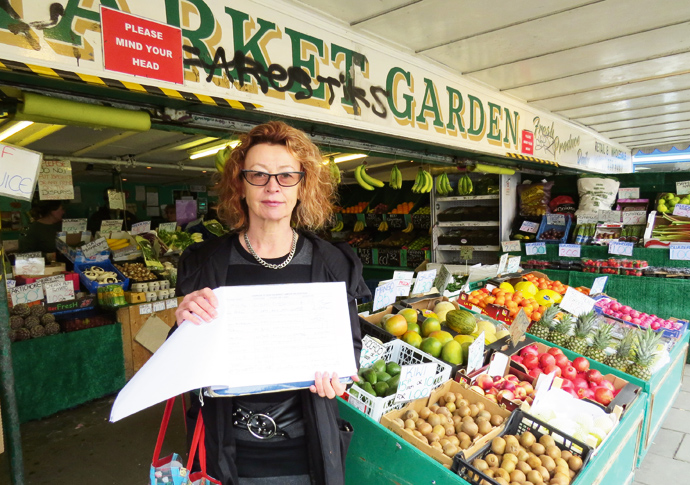 Kay Scorah with the petition outside Market Garden, calling for the Essex Road fruit & veg shop to be saved

SHOPPERS at an Essex Road greengrocers have launched a petition to help keep the decades-old store open.

Regular customer Kay Scorah launched the campaign after the owners of Market Garden told her their future appeared uncertain.

Jacqui Emery, who has run the fruit and veg shop with her husband for the past 20 years, said their lease is up in June and it is unlikely to be renewed.

There are fears that the site, in between a butchers and fishmongers, could be redeveloped into flats.

Ms Scorah’s campaign calls for Market Garden to be able to stay on the site until any work starts, and that they can be offered an affordable lease in potential new-builds.

Ms Scorah, of nearby Popham Street, told the Tribune: “This shop is part of a community of independent shops here and everybody gets to know everybody through the shops.

“I come out on a Saturday and my shopping takes about two hours as I’m having such a good time in the shops.

“I used to live in a neighbourhood which lost all of its independent shops in a couple of years and I do not want that to happen here.

“I’ve also got this thing about packaging, and you can come in here and get smaller amounts without the plastic.”

No planning application has yet been submitted to Islington Council for the site but Mrs Emery said she was told in December they would have to leave in June as it was going to be redeveloped.

She added: “All we want to know is, if they are not building anything here straight away, can we just stay? That’s why the customers have started the petition.”

John Binns, a regular customer who lives on Cross Street, said: “They sell really good fruit and veg here and it’s an important part of the community – you can drop in for a chat whenever you like.

“We don’t need any more luxury flats or supermarkets, this is the kind of shop we need.”

So far, more than 600 people have signed the petition which was started last week.

The Tribune has made attempts to contact the landlord and owner of the site but had not heard back at the time of going to press.

To view the petition, visit change.org/p/islington-council-planning-department-save-the-market-garden-on-essex-road-islington