Highbury Corner: Give us a break before yet more roadworks 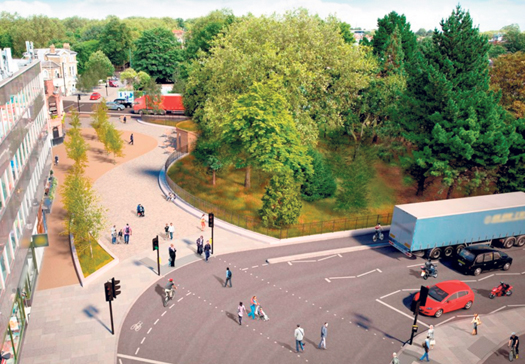 • WE were shocked by the letter from Councillor Claudia Webbe (We plan seamless construction work, February 23), referring to the lack of announcement about plans to close the western arm of Highbury Corner. Which is indeed the case.

The much-wider pavement now being laid out seems to pre-empt future discussion, and Cllr Webbe wants to join up the central green space to revive the scheme proposed two years ago.

The fact is that work at Highbury Corner has been going on for three years, with a few more months to go, causing disruption, delay and pollution to thousands each week.

Cllr Webbe seems keen to revive the Transport for London scheme of closure with no delay. Two years ago, TfL and Islington Council consulted on the principles of their proposals for the hub.

They had more than 2,800 replies, including objections, among many others, that it was too complicated, with too much provision for cyclists and unworkable lanes; that bus users would be disadvantaged; that the weight of traffic, mainly going north, would be forced into a detour, slowed and backed up with six sets of traffic lights; that the very wide roads, resulting in the loss of 19 trees and more than a quarter of the green space, are unacceptable; and that the 277 bus service would be ended.

We are still waiting for the revised proposals from the Mayor and his team and for consultation on the details. Given the extreme financial stress on TfL, we can surely hope that at least there will be a long pause for consultation in detail before considering yet more roadworks here, giving hard-pressed residents and businesses a respite from the disruption.

Experience with excessive new fixed cycle lanes south of the river – fixed in concrete rather than flexible according to need during the day – has included disruption of buses and much else. The new scheme at Archway took years to put in, and has caused traffic jams and pollution.

TfL has said that Highbury Corner is one of the top 20 hubs in London. According to the Office of Rail and Road (November 21, 2017) the station is now the ninth busiest interchange in the country.

Any plan to modify the hub or road network should give much more attention to reopening the entrance on the other side of Holloway Road, and to the redesign of the station.

Above all, in our view plans need to be set out with concern for the effects on the wider area of north London.