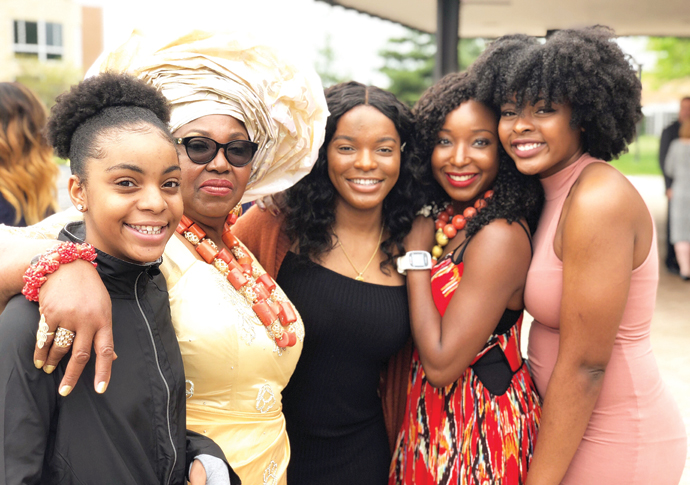 Stella Aguocha (second from left) with family and friends

AN esteemed housing officer described as vibrant and larger than life has died after contracting Covid-19.

Stella Aguocha worked at Islington Council for 20 years where she specialised in homelessness prevention, which she performed with sensitivity and dedication.

In her time there she helped support hundreds of people into housing.

Nnenna Aguocha, Stella’s daughter, who lives in the United States, said: “I think my mum has always been service oriented, has always had a heart and a passion for helping people. One of my mum’s favourite mottos was that she just believes in doing good in the world because she hopes that when people encounter her own children in the world, they would be just as generous to her children.”

Stella moved to the US from Nigeria as a young woman to go to college before relocating to Nigeria in the 1980s.

She then moved to the UK while her three children were raised in the US. Stella had been making plans to move to the States and reunite with her family after retirement.

In the UK she raised another daughter, 24, who is disabled. She went to the International Gospel Church in Burnt Oak for 35 years where she made many friends.

Her nickname to her friends was Star, while others called her Masterpiece.

Ms Aguocha said: “Mum had a tough life but she never really spoke about her problems, no matter how much she was going through. She always shielded us from that. Her faith was so important to her in terms of encouraging her and giving faith.”

Stella designed her own jewellery which she would wear to church and traditional celebrations. She started 15 years ago and specialised in coral beads.

Ms Aguocha said since her death Stella’s coworkers have shared videos of her dancing in the office, bringing cheer to the working day.

She said: “Anyone who knew her would describe her as vibrant and just larger than life. She was an amazing, amazing dancer.

Savvas Panas from the Pilion Trust worked closely with Stella for many years. He said: “For me and for everybody who is homeless it is a massive, massive loss. She would fast-track through housing. She would come here and we would sit and do things together. They would be processed quite quickly.

“Sometimes when people go into housing you can see they are restricted to what they do.

“But Stella understood the mental health and domestic violence nuances and processes.”

Stella helped house Eva Borges, her mum and her younger sister who were sleeping rough in 2012 after fleeing domestic violence.

She said: “A lot of people do these kinds of jobs and it’s just a job to them, but she really had her heart in it.

“My mum didn’t have any money and Stella treated us to stuff from the shop and even though we said no she got us sandwiches and juices.

“Even after that she used to see us around. She used to be so proud of us. I even got to know her daughter. She was like an angel, a guardian angel.”

Stella Aguocha died on February 15 three days after her 67th birthday. She leaves behind four children.