‘It’s intrusive, but stop and search can save lives’ 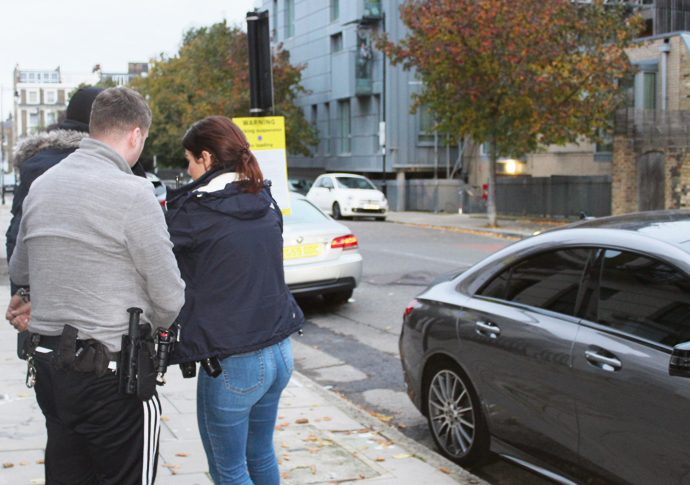 POLICE have defended stop and search, saying it is “an intrusive tactic but it does save lives”, as the Tribune joined officers on patrol in Islington.

On Tuesday, we set off with two officers from the Central North Violence Suppression Unit to fight crime in the borough.

The officers, PC Amy Collard and PC Zak Tallis, said a key part of their remit is to “go out and find their own work”.

This means, in part, stopping individuals believed to have criminal links and searching random suspicious individuals in the street.

When asked what makes someone suspicious, PC Tallis said: “It’s how they react. We’re looking at body language and behaviour. Most normal people won’t do a double-take or run when they see the police.”

As we drove around the borough, scanning the pavements for suspicious behaviour, a call came in from the command centre. There had been a report of “three Asian males” walking down Offord Road, Canonbury, and that one was carrying a knife.

We sped over there with more information coming in on the way: the males were wearing blue hoodies and balaclavas, and CCTV had tracked them down the road.

PC Tallis set the risk as “high”, given the likelihood of there being a concealed weapon. 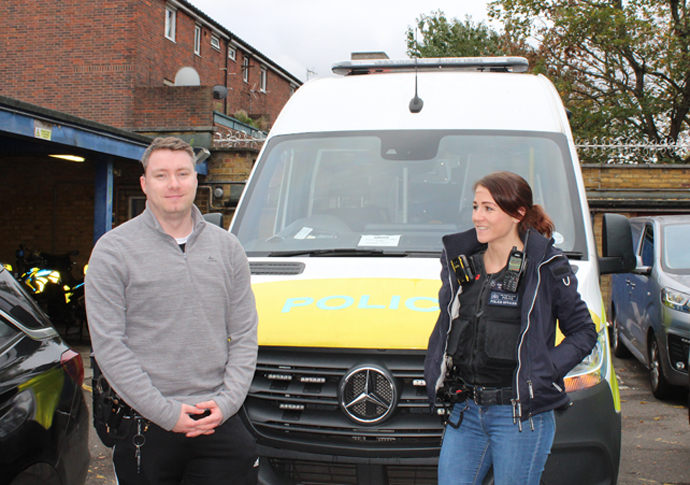 We arrived on the road and screeched to a halt in front of a young man in a blue hoodie with a full-face black balaclava on. He was leaning against the wall checking his phone.

PC Tallis handcuffed him while PC Collard began to search him.

The man expressed confusion, protesting that he hadn’t done anything. As the search progressed a young woman and an older man appeared, who said they knew the suspect.

The man said: “You’ve got no reason to be stopping him, you guys do this all the time – black people are easy pickings.”

At this point another man walked past. He said: “You can’t just arrest someone for being themselves.”

PC Collard stayed calm and explained to the man and his family what was happening: “We received a report that a man matching your appearance, in a blue hoodie and balaclava, was carrying a concealed weapon on this road. We have no choice but to search you if there is any chance you might be carrying a knife.”

The officers didn’t find anything on the suspect, and after advising him not to wear a balaclava in public, they let him go.

In the 12 months leading up to September, 6,880 stop-and-searches were carried out in Islington and nearly 80 per cent of these resulted in no further action being taken.

PC Collard said: “If you’d just walked past that and heard them saying ‘black people are easy pickings’, you would have thought we were in the wrong.

“But having seen the whole thing, I hope you can see why we did it.”

He added: “Stop and search is an intrusive tactic, but it does save lives.

“That’s the thing the media doesn’t focus on: how many lives we save. It only focuses on the bad stuff.

“Trust me, there’s no one who hates a bad cop more than a good cop.”

‘Some thieves dress as commuters’

THE officers said one of the main things they look out for is cyclists and scooter-riders, as half of robberies in Islington are carried out on bikes and mopeds.

PC Tallis said: “We look for people weaving on and off the pavement, going slowly, looking at pedestrians.

“In the morning, some bike thieves dress as commuters with jackets and high-visibility covers to blend in.

“They also recognise our [unmarked] cars, they know our number plates, so if they do a double-take at an unmarked car, that’s even more suspicious.”

After saying this, a call came over the radio from the other duty police car that they had stopped a pair of suspicious youths on bikes.

We put the blue lights on the car and sped over to meet them. When we arrived the PCs told me the suspects were known to the police and were thought to be connected to a spate of phone thefts in the area. They had a scooter and a bike, and looked like they couldn’t be older than 15.

The officers leapt out of the car to assist with the search, but they found nothing on them, and after running their IDs through the system, they had to let them go. Another search had been unsuccessful.