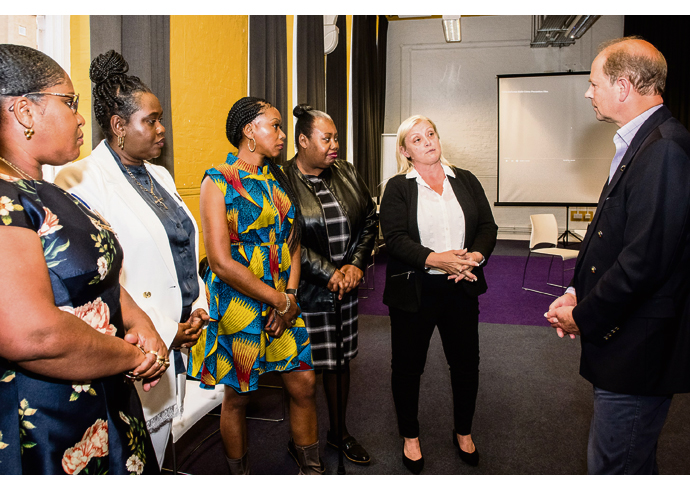 A MOTHER who lost her son to knife crime sent a direct message to the royal family about the need to tackle youth violence.

The Earl of Wessex, Prince Edward, was ­visiting the Lift youth hub in White Lion Street on Wednesday when he met the Love and Loss group, made up of parents who have lost children to knife crime.

This included Michelle McPhillips, whose son Jonathan “JJ” McPhillips (pictured above) died in 2017 when he was stabbed in the chest in Upper Street. She is calling for more police officers to work on murder investigations, explaining to the Earl her concerns that her son’s killers might never face justice.

Ms McPhillips told Prince Edward: “We do still need to keep on getting young people off the streets and supporting them to change the way they think. Whenever we hear about a murder, it takes us back to day one. Basically those feelings erupt.”

She added: “The message is, and what we are trying to say is, we don’t want anyone else to feel what we are feeling or walk in our shoes.

“We don’t want to see any more young blood in the street. The teams [in the police force] are so understaffed that they don’t actually have the people to investigate the murders. We do need more police to do the investigations.”

Four years on, nobody has been with charged with JJ’s murder.

The Love and Loss group made a film about the aftermath of violent incidents featuring interviews with mothers who have lost their sons which has been shown to schools across the borough.

The tearful parents sat and watched the film with the prince and councillors Michelline Ngongo and Troy Gallagher, the Mayor of Islington.

Ms McPhillips said: “The thing is, we need to get those weapons off the streets, stop them being manufactured, stop them being sold. Why do we need a zombie knife in this country? It is totally useless unless you are going to do something bad with it.

“The way the young people are thinking, getting them to hang out differently, getting them not to congregate and not allowing them to become a gang. A lot of that comes back to poverty. Poverty has a lot to answer for.”

Prince Edward said during the discussion: “That certainly is a problem across the whole of social services.

“Sometimes it is about focusing on one particular issue, really focusing on it, trying to deal with it and once it feels you’ve broken that cycle, move on to something else.”

He thanked the group for sharing the film with him, adding: “It is a very brave issue to bring up. It is such an important issue to many.”

Cllr Gallagher said: “It is about moving knives off the street. It is also about changing the mindset and the attitude [of young people] and also the issue of justice. It is a strong message, it is truly moving and more needs to be done to change these stories.”