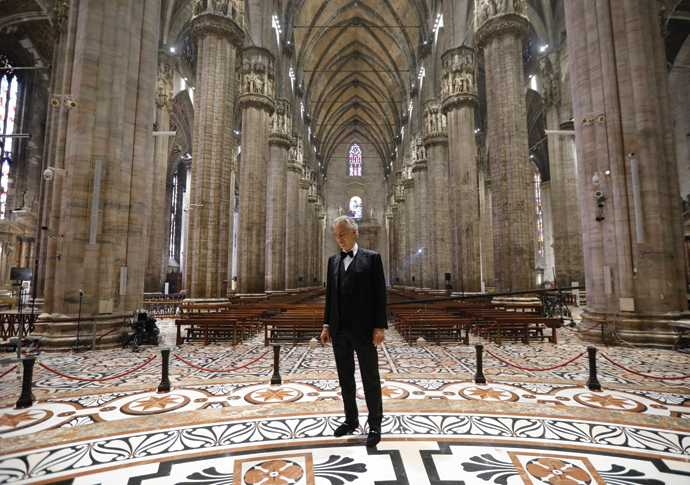 A MONTH into lockdown we’re still here (most of us), still sane (just about) and seeing it through with a bit of help from cohorts of musicians who continue to make their performances freely available on the web as a gift during dark times. Trawling through what’s on offer this week, one of the most memorable things I’ve come across – though it won’t be to everyone’s taste – is a staging of Bach’s Matthew Passion from the Hamburg Opera that you can access at staatsoper-hamburg.de. Musically it’s classy, with Ian Bostridge as the Evangelist, a keen young chorus, and Kent Nagano conducting. But the look of it is what will strike you – everybody dressed in eye-assaulting white, with strange things going on like wrestling matches and an 83-year-old woman hanging from a trapeze as the piece unfolds. The idea (I think) is to present the Passion as a communal experience that reaches into all our lives. Abandon your up-front misgivings and you’ll find it fascinating. Maybe.

• Another hangover, as it were, from Easter is the 30-minute concert Andrea Bocelli streamed from an eerily empty Milan Cathedral last weekend. So far it’s been watched by 25 million people, but if you weren’t among them you can still see it at Youtube.com/AndreaBocelli and marvel at the curious resemblance that the singer bears now to an ageing Philip Schofield. Personally I’ve never been a big Bocelli fan – I find the voice too technically adrift – but bow to the fact that he touches many hearts. And though the repertoire he sings here is all pretty standard, it delivers what the concert’s title promises: Music for Hope. And comfort.

Something that comforts me as I stay home and go no further than the supermarket are memories of past trips abroad for music; and I’ve been thinking about a visit I paid last year to the domaine in mid-west France where the conductor William Christie lives and hosts a festival for his celebrated baroque-band Les Arts Florissants.
Like a miniature Versailles, Christie’s estate is picture perfect. And if you visit his website, arts-florissants.com, this week you’ll not only get a guided tour of the gardens but links to free concerts in which he leads Les Arts Flo (as the band are affectionately known), including their 40th anniversary concert filmed in Paris last December and a cycle of the complete Monteverdi madrigals. Alternatively you can access the concerts direct at live.philharmoniedeparis.fr

Closer to home, if you’re not fed up with it by now, the Philharmonia Orchestra have just put online a classic Festival Hall performance of Beethoven’s 9th, filmed in 1970 with Janet Baker among the soloists and the venerable Otto Klemperer conducting. Klemperer was a fragile figure in his mid-80s at the time, so you see him conduct from a chair, holding his baton with a clenched fist as a baby holds a spoon. But it’s a lesson in authority and inner power, ruled by sheer force of will and truly inspirational. It’s on the orchestra’s Youtube site, but accessible from philharmonia.co.uk