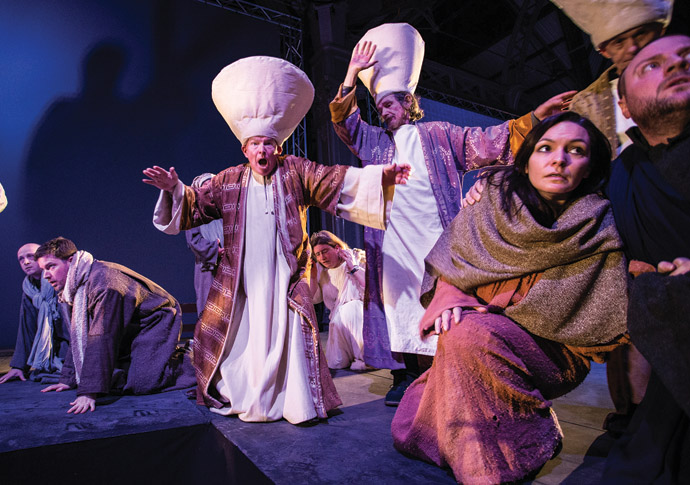 IF nothing else, lockdown provides time to relive good experiences from past years and imagine you were having them again rather than sitting doing nothing. And a particularly good experience I’ve been reliving happened four years ago in Manchester when one of Britain’s best professional choirs, The Sixteen, staged Bach’s Matthew Passion in a market hall. It was an “immersive” performance with the action moving through the building and the audience in pursuit, getting physically embroiled in clashes between Pharisees, disciples, temple guards and people shouting “Crucify”. And curiously moving was the involvement of a group of homeless people, who supplied much of the action and occasional singing alongside the professionals. I remember it as sometimes rough and ready, but exciting and impactful too. And it’s now freely available on film: at www.thesixteen.com/archive-performances Visit the website and you’ll also find a free film of The Sixteen in the grander circumstances of a concert in the Vatican at which they sang music by Sir James Macmillan. And if all this turns you into a fan (easily done), check out a new series of podcasts in which The Sixteen’s director Harry Christophers talks music with other choir conductors like Robert Hollingworth of I Fagionili. The podcasts are called Choral Chihuahua (a word I never thought I’d find myself typing into a classical music column) and I can’t explain why, except that it’s a joke – designed to tell you that although these podcasts address serious issues, they’re still fun. Accessible at www.thesixteen.com/quarantine-with-the-sixteen

OTHER things to watch for this week include a complete festival which, thanks to Covid, has migrated online. It’s the English Music Festival, which normally happens in the rural idyll of Dorchester-on-Thames but this year comes direct to your kitchen in a packed timetable of events running May 22-25. They’ve tried to make it as close to reality as possible, which includes having a box office – there are modest charges for “attending” the talks and concerts, which start at specific times. I’m not sure how it will turn out, but this niche festival is a must for anyone who values English lyrical composers such as Vaughan Williams, Bax and Delius. Full details on the website: englishmusicfestival.org.uk

FINALLY, a tribute to a giant of chamber music: the last-surviving member of the Amadeus Quartet, cellist Martin Lovett, who has fallen victim to coronavirus at age 93. The Amadeus was perhaps the most celebrated string quartet active in the mid/late 20th century. It ran for four decades with the same personnel. And though it came to be based in north London, Lovett (who lived in Hampstead) was the only member British-born: the other three were refugees from Nazi Austria who met in an internment camp. I got to know Lovett a little, serving alongside him as a judge for a music competition in Buenos Aires, and recall being impressed by the extent to which, even as an elderly man, he seemed to attract armies of female admirers. Not least in Argentina. He was funny, generous, a musician of enduring stature. One of the greats.