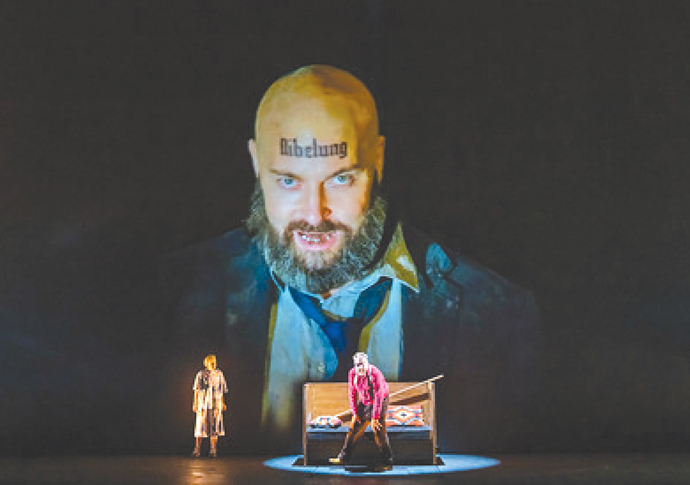 WHEN it comes to opera, Wagner’s Ring is the event that (as it used to be appropriate to say) sorts men from boys. A cycle of four operas, most of them long, with a total running time of around 16hrs and requiring a massive orchestra, massive voices, and all-round endurance, it’s not for the feint-hearted. But then it does embrace, in mythological terms, the history of the world from start to finish, so what else would you expect? And English National Opera has just, bravely, launched a brand new Ring – beginning with the second opera in the cycle, The Valkyrie, which contains the famous Ride music that everybody knows although they might not understand the context (it’s about dark angels picking up dead warriors from battlefields).

Directed by the celebrated Richard Jones, this ENO production toes the usual line of modern stagings by deflating the heroic elements in Wagner’s narrative and showing you the Nordic gods as very human beings – dressed by Primark and behaving like a bunch of nerdishly suburban psychopaths. Stylish it’s not, and there’s a tacky element of am-dram in the way it plays out. But that said, it works: you get the point. And better still, you get extraordinary singing – from outstanding British artists like Brindley Sherratt (as the villain Hunding), Matthew Rose (as king of the gods Wotan), and the ever-rising tenor Nicky Spence (who sings his heart out as the doomed hero Siegmund).
ENO’s music director Martyn Brabbins conducts, not magisterially but well enough. And if you can summon the discipline to sit through the five-hour duration, you won’t come away thinking it wasted time. Performances continue to December 4. Eno.org

• When the pandemic struck, a promising young Polish pianist by the name of Krzysztof Moskalewicz found himself locked down (congenially as it turned out) in Highgate Village – where he decided it would be a good idea to plan some local concerts. A few weeks ago the first one, a solo recital, ran at St Michael’s Church and drew such an unexpectedly big audience that he’s organised the next for this coming weekend. He shares the platform with cellist Leander Kippenberg. The music is Fauré, Franck, Tchaikovsky. And it it’s clearly the place to be on Saturday 27, 7.30pm, again at St Michael’s (South Grove, N6). Tickets on door or through wegottickets.com

• The rather more established pianist Stephen Hough celebrated his 60th birthday recently, though his post-lockdown schedule is so busy I don’t think he had much time for celebrating. On Wednesday December 1 he’s back at the Festival Hall playing Beethoven’s 3rd Concerto with the London Philharmonic Orchestra. And paired with Shostakovich’s 10th Symphony, it’s a concert in memory of the late, great Bernard Haitink who was the orchestra’s principal conductor during the 70s. 7.30pm start. Details: lpo.org.uk

• You know Christmas is due when the Messiahs start coming; and quick off the mark is the choir of Westminster Abbey which has one at 7pm, Tuesday November 30, under the Abbey’s music director James O’Donnell. It’s a good place to hear the Messiah because Handel is buried in the building, so during the interval you can admire his memorial: the fine life-sized statue by Roubiliac that shows him holding the score of the Messiah aria I Know That My Redeemer Liveth in his hand. Tickets via the St John’s Smith Square website: sjss.org.uk