Misfits are looking the part 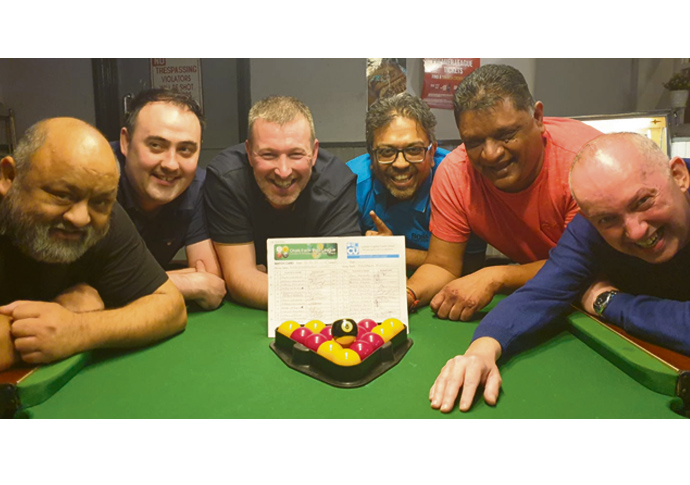 Maddens Misfits celebrate their win over Northumberland Lions on Monday

AFTER an 18-month break from the table, Camden and Islington’s “premier pool competition” finally returned on Monday, bringing some much-missed drama back to the green baize.

One of the matches of the night upon the Chalk Farm Pool League’s big return took place in King’s Cross where the Northumberland Lions team, who previously played as The Constitution, took on newly promoted Maddens Misfits.

Captain Francis Murphy would have been delighted with how his Lions side had seemingly settled into their new home as they raced into a four-frame lead.

Needing just one more for victory, the game looked all but over. The Misfits, however, were in no mood to start the new season with a defeat.

Zah Janjua and Enda Murray started the comeback with a win in the opening doubles match of the night. Justin Stokes and Navin Kabaria, and Paresh Patel and Steve Daniels then won their doubles matches, before Lee Stantiall beat Chris Kelly to tie the match at 4-4 and set up a final-frame decider.

The Lions looked like they had survived the scare when Gary Dugdale came to the table and took out most of the reds.

But when he ran into traffic after a decent break, Kabaria seized his chance, held his nerve, and pocketed a memorable win for the Misfits.

League chairman Shaun Pollard, who had the misfortune of watching the Misfits make their comeback as part of the losing Lions team, said: “Just before the pandemic forced us into lockdown, Maddens Misfits had been crowned worthy winners in division three.

“Now we’ve returned to action with two divisions, and it was decided that they should be in Division One.

“There were fears that jumping up two divisions might be a big ask for them, but we can see by how they played tonight that they are going to be a worthy addition to the top flight.”

The biggest win of the night in Division One saw King’s Cross Invaders beat Cousins Patriots 8-1, while there were also 6-3 wins for both King’s Cross Hurricanes and King’s Cross Gunners.

Pollard added: “It’s fantastic to be back. We’ve all really missed the sport.”