MP Thornberry on Johnson’s patch to back new vote 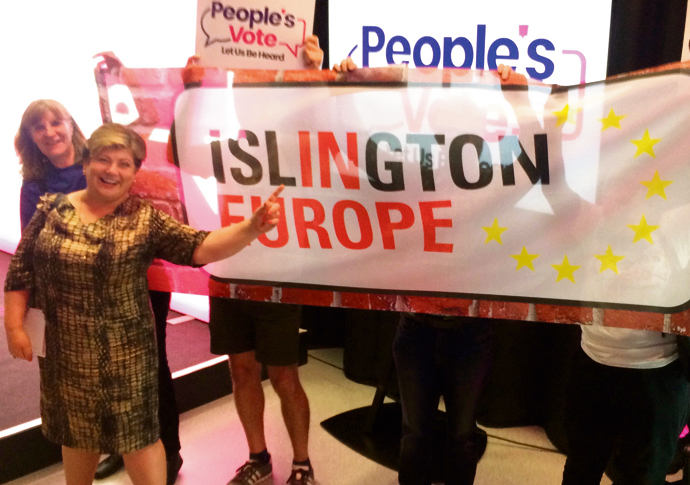 REMAIN supporters in Islington had a “big smile” on their faces as Labour frontbencher Emily Thornberry led a People’s Vote march in Boris Johnson’s constituency.

Campaigners who want a new referendum on Brexit were up at the crack of dawn on Sunday to travel to Uxbridge to hear the Islington South MP speak at a People’s Vote rally for the first time.

After months of calls for Labour to make a clear statement on Europe, Ms Thornberry said the party would “unequivocally” campaign for a confirmatory vote – also known as a second referendum – on any outcome of the Brexit negotiations, whether that be a new exit deal or a no-deal scenario.

She added that Labour would also “unequivocally campaign for remain” as staying in the European Union was “logically” the best way to do the least harm to “jobs and the economy” in the UK.

Islington in Europe spokesman Nick Turton said: “Hearing Emily’s fulsome support for a People’s Vote on any form of Brexit, and her unequivocal commitment to fighting to stay in the EU, put a big smile on the faces of our Islington South campaigners.”

Ms Thornberry openly criticised Labour’s handling of Brexit after the European elections in May, which saw it struggle even in a heartland such as Islington.

The Liberal Democrats made significant advances at the polls.

She had said in reaction: “We were not clear on the one single thing that people wanted to hear.”

Last week Labour Party leader Jeremy Corbyn – her fellow Islington MP – sent an email to party members announcing that he would push for the next Tory leader and UK prime minister to go back to the country.

But Mr Turton added: “If Labour’s shift in policy is to mean something, the party – right to the top with Jeremy Corbyn – now needs to throw all its weight and passion into fighting to stop Boris Johnson’s threat of a no-deal. It won’t happen by chance. We need to see all like-minded MPs put their party interests aside and do every single thing they can to stand in his way.”