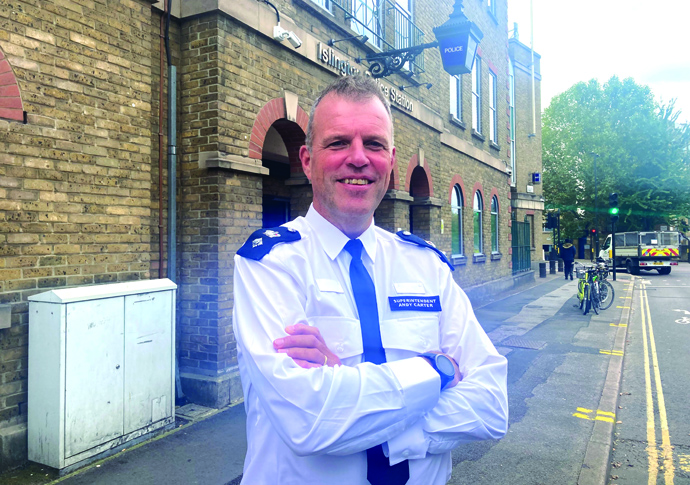 Chief Supt Andy Carter: ‘Every interaction with the police needs to have a long-lasting positive impression’

A FORMER quantity surveyor who switched careers to the police has become the borough’s most senior officer.

Chief Superintendent Andy Carter started work as Islington’s borough commander last month – succeeding Raj Kohli, who has switched to a position in Hampshire and the Isle of Wight.

He joined the force 28 years ago, after qualifying as a quantity surveyor. “I graduated from the University of Bristol in the 90s but there weren’t many jobs, so I thought I’d do a few years in the Met, and then I never left,” he said.

His two top priorities, he said, are increasing trust in the police, and increasing the detection of crime.

“Every interaction with the police needs to have a long-lasting positive impression,” he said. “We need to engage with the public to find areas where trust in the police is particularly thin, and then target those.”

Chief Supt Carter is expected to answer questions from councillors next month on what the police are doing to stop violence against women and girls at a special meeting at the Town Hall.

Part of the problem, he said, is supporting victims through the investigation: “There are lots of reasons victims don’t want to see prosecutions through, it takes a tremendous effort to keep them engaged.”

To do this, Chief Supt Carter wants to work in partnership with the public and third sector organisations and develop his own staff to help them maximise their full potential.

He said: “I want to create an environment where people feel they can report wrongdoing, particularly female staff. It’s essential to embed a mindset of what won’t be tolerated.”

He added: “Policing can feel very hierarchical, but I want to be approachable.”

Under his watch, in mid-December the new town centre teams will be coming into force, doubling the number of PCs in Camden Town, Holborn, St Pancras and Somers Town and Regent’s Park.

He said one of the problems will be training the new officers: “The police has such a young workforce, if you’ve done two to three years, you’re considered an experienced officer.”

Chief Supt Carter lives in Kent with his two children.

Although he trained in a different profession, he said he’s never looked back. He said: “Policing is an incredibly rewarding profession.”