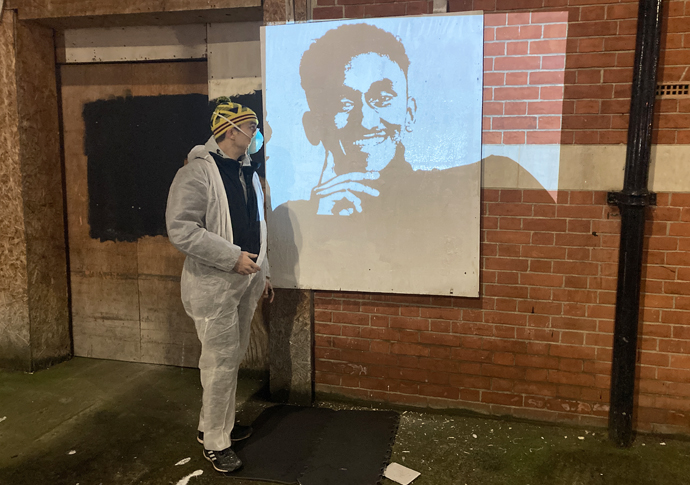 AN Arsenal fan who has left Banksy-style artworks on walls around north London will be painting a tribute to a supporter who was stabbed to death on his way to a match.

The mystery artist plans to honour Tashan Daniel who died before the Gunners’ fixture against Nottingham Forest in 2019.

It will appear at the old police station building in Blackstock Road.

“I remember taking my son to that game – he [Tashan] didn’t get to,” said the artist, who has been christened “NorthBanksy” by online followers. “Those guys stormed Hillingdon [tube station] and murdered him for nothing.”

The painting comes as Arsenal launched their “No More Red” campaign against knife crime. 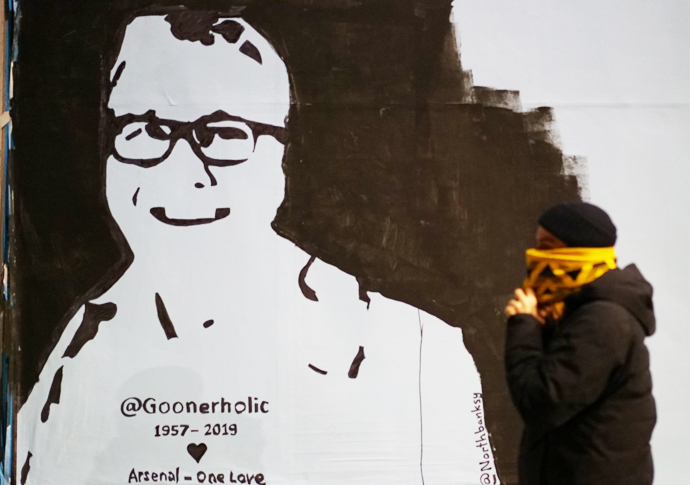 The artist is not endorsed by the club and is not affiliated in any official way. He said if he was, it would restrict some of his content. For the past few years, he has left a series of black and white paintings on walls relating to the team.

In 2019, he stenciled a picture of midfielder Granit Xhaka on fierce rivals Spurs’ stadium.

He posted an online video of it which went “really viral” – and before he knew it “the police turned up, they’d traced me to the graffiti and handcuffed me in front of my wife in my bedroom”, he said.

The case went to court but was dropped due to lack of evidence – CCTV footage of the incident had been lost.

Other works include stars Bukayo Saka and Emile Smith Rowe embracing, a memorial to the late Arsenal blogger “Goonerholic” – and a more recent work about the refereeing in one of Arsenal’s matches. 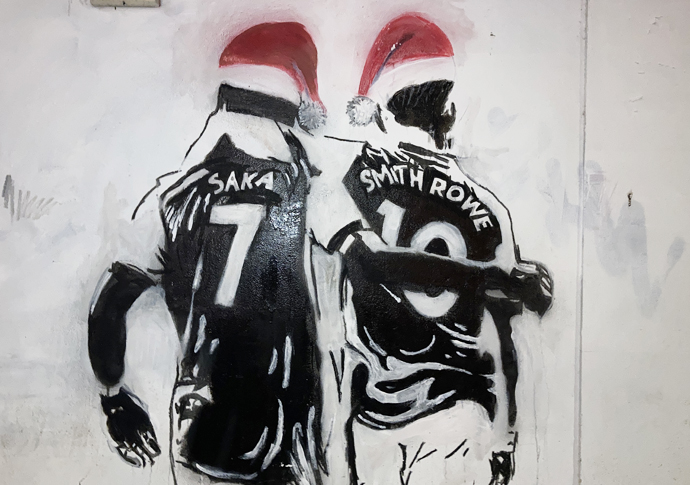 “Obviously official artists affiliated with the club are not going to do something like this because it’s potentially libellous,” he said.

NorthBanksy said he is not interested in commercialising his work. “My idea is to do something that you can’t buy,” he said. “Lots of artists who do Arsenal are all running Etsy shops. I’m not going to have a lockup of £2 Arsenal tea towels for sale on Etsy.”

He added: “Everyone nowadays seems to want to either become famous or rich, as if that’s the final apex of human endeavour. I don’t do it for that. This is for me and you, and you can look at it if you’re in the area, you can even find it if it’s still there. But nothing lasts forever: we don’t, my paintings don’t. People like that it’s popping up and adding to the culture. All the other Arsenal stuff is sponsored.”

The artist said the Emirates Stadium is at the core of north London.

“During lockdown, it grew a heart – this funny, strange, soulless stadium,” he said. “Everyone was going there every day for their allotted hour [of exercise]. For me, Arsenal is much more than somewhere I go to watch football. On those terraces it’s like a big family from all around the world.”