Notes on a new museum

Michael White explores the delights of a £40m renovation at the Royal College of Music, from pocket-size violins to a Mozart masterpiece

The 19th century was an age of innovation, with experiments in new materials, shapes, and systems to create louder instruments with a wider range of notes. The RCM Museum’s display of wind instruments is filled with examples from London, a leading production centre in the 1800s when more than 400 makers had workshops in the city

LONDON isn’t under-stocked with music colleges, with five of serious significance – the Royal Academy, Royal College, Guildhall School and Trinity Laban in Greenwich – drawing students from around the world.

But while they all have concerts/operas/ masterclasses that are open to the public, they have never done a great deal to draw passers-by into their buildings. Until now, with an initiative that the director of the Royal College of Music, Colin Lawson, calls an attempt to “make our premises more welcoming … and not a hidden gem”.

It’s the result of a £40million renovation project that’s been running at the RCM’s South Kensington site for some seven years – not that you’d notice from the street, because most of the work has gone on deep inside the building with normal college life somehow continuing around it (and when things were far from normal during the past 18 months, there wasn’t anyone around to notice what was going on). So when the changes were unveiled the other week, they came as a surprise.

But it’s a good surprise, that will get better still next year when people find themselves with time to kill before an Albert Hall Prom and in need of somewhere civilised to kill it.

To begin with, the college entrance has been opened up from the street, in a more inviting way than previously existed. Looking into the now airy foyer, you can see through to a brand new, public-access café that extends into a courtyard. And, above all, there’s a new museum, open to the public free of charge throughout the week. 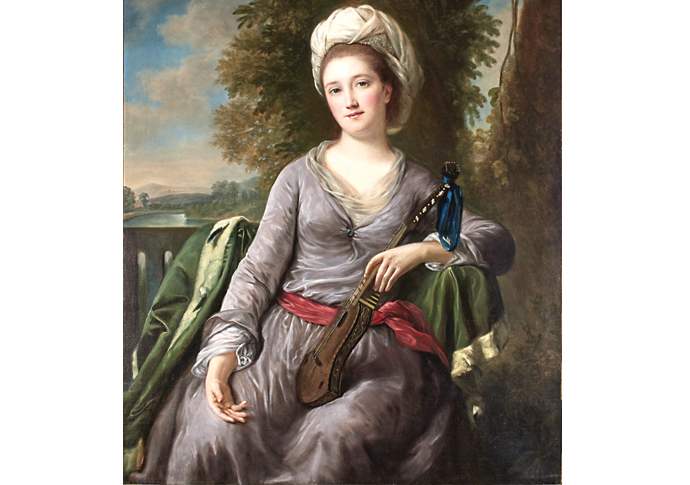 The beautiful bell cittern this aristocratic young woman holds is so finely decorated that it would have been considered a fashion accessory at the time. The exact instrument is also displayed in the RCM Museum – a rare example of a musical object portrayed in a historical artwork that has survived to the present day

There has always been some sort of a museum at the RCM, but it was poky and obscure and not too many people knew that it was there. Now it’s been totally transformed thanks to a £3.6million grant from the Heritage Lottery Fund. And though it’s still small by London museum standards, it’s a striking space that provides a vastly improved introduction to the treasures the college has amassed since it was founded in 1883.

To give you the stats, there are some 15,000 objects in the RCM collection; and even with the new accommodation there isn’t room to show more than a fraction of them at any one time – which is why the upper floor of the rebuilt museum will have a turnover of content, organised into temporary exhibitions. But on permanent display you can expect to see things like the world’s earliest-known guitar and earliest stringed keyboard instrument – both in playable condition, as are all the instruments on show. 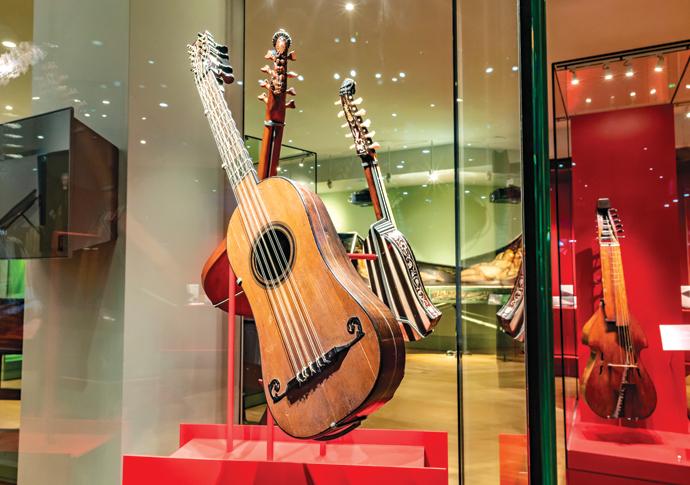 16th-century singers and dancers would have been accompanied by instruments like this exceptional Portuguese specimen, which happens to be the oldest surviving guitar in the world

There’s the best-known portrait in existence of composer Joseph Haydn – an image so famous the RCM gets requests to reproduce it on biscuit tins and socks (“most of which we turn down”, says curator Gabriele Rossi Rognoni). And right now there’s an original Mozart manuscript – the literally priceless score for his great C Minor Piano Concerto K491, in an interactive case complete with digital facsimile that lets you turn the pages as the music plays.

A piece of serious fun – although it carries a certain weight of emotion too. “I’ve seen people look at that original and burst into tears,” says Colin Lawson, “because it’s a real working manuscript that shows you how he assembled the piece, putting down the orchestral parts and then squeezing in the piano. It’s very moving to see that process taking place.”

Less fun but definitely serious is a display of old and rather beautiful ivory recorders, together with digital data about the vast number of elephants slaughtered for their tusks, and a research programme being run in conjunction with the Natural History Museum to develop alternative materials for making instruments. 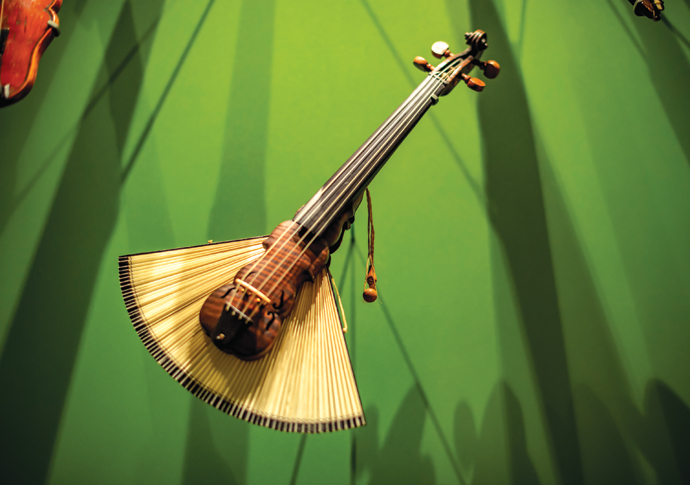 Pochettes are very small violins, designed to fit into a pocket – some contained a hidden compartment for a pop-out fan

And back with fun, there’s the absurd delight of a batch of 18th-century pochettes – which were tiny violins compressed into something like the shape of a cigar so they could fit into the pocket of a frock-coat. They were made for dancing masters, who would whip them out when needed during lessons with young ladies. And although their sound was terrible – like tinny, high-pitched violins – they were symbols of the wealth a well-known dancing master could acquire, and often fancifully constructed to perform two tasks at once. The RCM collection has a pochette that incorporates a fan!

If that isn’t enough fun, the new museum also incorporates an “Engagement room” where children are invited to experiment with sounds, learn how instruments work, and generally make a lot of noise. And behind all these initiatives is some hard thinking about how a traditional conservatoire should be evolving to address 21st-century needs.

As Colin Lawson says: “We’re not an arts centre, we’re a place to witness the education of professional musicians. But one of our aims is to get beyond music. Our students are specialists, but they need to know that there’s a world beyond the very particular things they do, and meet it face to face. That’s why we want the world to come in through our doors, to a greater degree than before.

“People would walk along Prince Consort Road and pass this building all the time but never think of coming in; and the fact is, we haven’t made it easy for them.

“Now, with the rebuild, I hope that will change. We’ll be the hidden gem that isn’t hidden any more.”

• Details about public events at the RCM and access to the museum, library and café at rcm.ac.uk