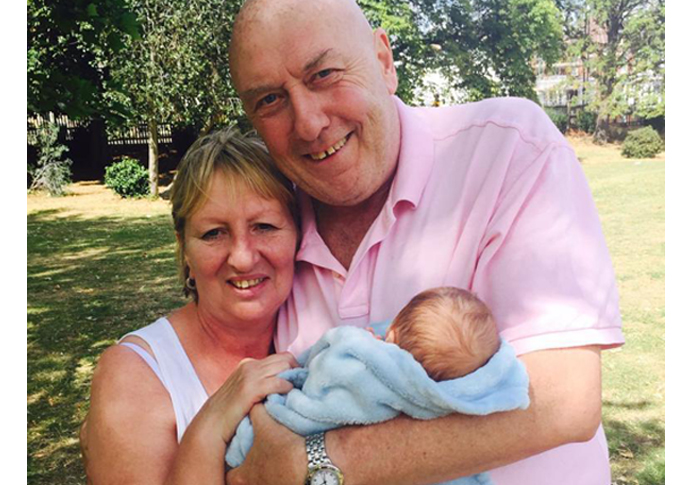 William Earls with his wife Debbie and grandson Sid

COVID-19 “rips lives apart” a heartbroken daughter has warned as she paid tribute to her father after he died from the virus.

William Earls – known as Big Wilf to his friends –was put on a ventilator at the Royal Free Hospital on New Year’s Day and battled the virus for weeks before he died last Monday.

His wife and three daughters say they have been “totally overwhelmed” by the messages of condolence and support from hundreds of people who knew and loved the former Post Office worker and devoted Arsenal fan.

His daughter, Samantha Earls, said: “To be honest it doesn’t feel real. You can’t believe how horrible this virus is.”

Mr Earls, 60, was born and brought up in Sussex Way, Upper Holloway, by his mother Rita after his father died when he was a young boy.

He went to St Mark’s Primary School and then what used to be Tollington Park secondary school.

He left school at the age of 16 to work as a messenger boy at the post office. He worked up the ranks over 20 years until he was delivering to offices and depots. Then he took a job laying pavements before becoming an asbestos surveyor.

His two great loves, however, were his family and the Arsenal. In the 1980s and 90s he would organise coaches for away games and held a season ticket in Highbury’s East Stand.

Samantha said: “Dad was a gentleman. He was happy to do all the organising for the coaches and he was always the first person to buy a round in the pub. He loved being with everyone watching the games.

“It’s like another family, the Arsenal. Wherever you’re from, whatever background, religion, ethnicity, you all have that same love.

“Whenever we were going to home matches he would call it ‘going to church’.”

Mr Earls married his wife Debbie in 1986 then moved to the Harvist estate in Holloway, where they started their family before moving to the Hilldrop estate, off Camden Road, to raise their three daughters – Kelly, Samantha and Hayley.

“Mum was the love of his life completely – well, other than the Arsenal,” Samantha said. “They were together nearly 40 years and their anniversary was on January 17. Dad was in hospital then. It was the first time they didn’t spend that day together. They were soulmates.”

She added: “Dad was larger than life. He always greeted us with a smile and he stood with pride. He presented very well, always looked after himself and very respectful, that’s how he raised us.”

Mr Earls had seven grandchildren who he “adored”.

He kept working last year, then on December 20 he started feeling some aches.

Samantha convinced him to get a Covid-19 test and it came back positive the next day.

She said: “It was mainly body aches, then a slight cough, that kind of went and then it came back with a vengeance. He fought it – then he called me and it was a cry for help. He said ‘Sam I’m struggling’. This virus rips lives apart. Part of our family is gone forever. And it doesn’t feel real.”

Mr Earls’ friend Mick Doherty set up a crowd-funding page to help the family with funeral arrangements and other expenses. In less than 10 days, 250 people had donated more than £12,000.

Not just a statistic

EVERY day we are given Covid statistics by the government but deaths shouldn’t just be remembered by a dot on a chart.

This is why the Tribune remains resolved to tell the stories of the loved ones lost in this pandemic. Too many have gone without a proper send-off.

If you would like us to write about a relative or a friend who has died from Covid, please email: calum@islingtontribune.co.uk or call us on 020 7419 9000.