Plot lines: the lessons of ‘Dig for Victory'

Climate change may be the new enemy but one wartime message still resonates, says Dan Carrier 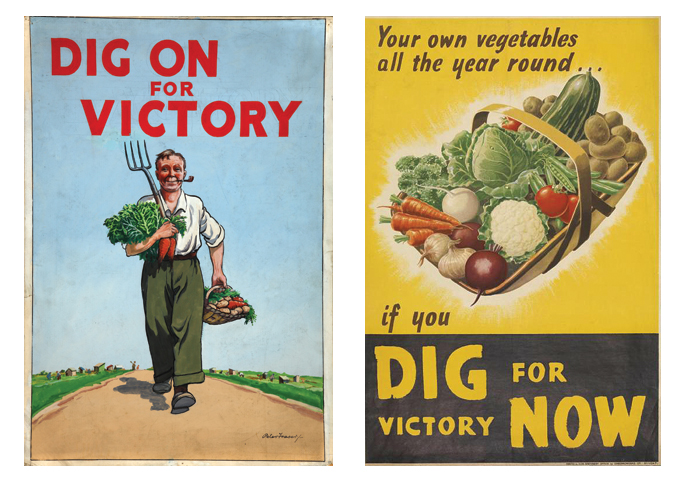 A GROUP of dustmen doing their rounds in Tottenham hit upon the plan: it was the early days of the Second World War, and they could not bear to see the amounts of food waste being thrown out – so they established a pig club, fattening up a back-yard porker with scraps.

And their club was such a success, it would be hailed by the government and be copied across the nation.

Today, with the carbon cost of food haulage a key driver in the climate emergency, cutting the miles from field to table is vital, and has turned attention afresh to the question of how much food can the UK grow domestically.

This was a key issue during the Second World War, and historian Daniel Smith’s book, The Spade As Mighty As The Sword, tells the story of the Dig For Victory campaign, a project to make the UK food as self-sufficient as possible.
Daniel outlines the urgency of the time. More than 30,000 sailors were killed on 2,400 British merchant ships sunk during the war. The threat of possible starvation weighed heavily on all. The government, facing a German U-Boat campaign in the Atlantic, feared mass starvation, and sought answers by increasing food grown on British farms – and persuading people to grow their own.

The Tottenham bin men, keen to do their bit, collected in three weeks enough swill to feed their pigs and supply 10 tons of feed to others.

“The contents of pig bins became known as Tottenham Pudding,” adds the author.

As well as the logistical problem of finding plots, supplying seeds and tools and providing advice there was the psychological challenge of persuading people the graft was worth it. Somehow a population that over generations had become detached from a cottage industry of food production had to be persuaded to take up growing their own ingredients.

Originally called the Grow More Food campaign, it was based on the idea of “an opportunity to foster camaraderie and give a sense of purpose to those who might otherwise have felt left out of the war effort. Growers got to spend more time in the open air, often surrounded by loved ones and close friends, carrying out labours that kept them fit and which produced satisfyingly tangible results – all in the interests of having more and better food to eat,” writes Daniel.

Minister Reginald Dorman-Smith fronted a campaign called Grow More Food – but he was not a man for catchy soundbites: “He made the task of growing food sound like it was all rather hard work,” says Daniel.

But from this slow start came perhaps one of the most successful slogans of all time – and hinged on the genius of Michael Foot.

Michael was writing leaders for the Evening Standard in 1939, and it was Michael who came up with the famous phrase Dig For Victory.

“Britain must learn to dig… Not only must we dig in the cities, every spare half acre from the Shetlands to the Scillies must feel the shear of the spade,” he wrote, exhorting Londoners to “spend your afternoon with a hoe not a hammock… this war may be won on the farms as well as on the battlefield… food wins victories as surely as gunpowder”.

Six days later, in another column, Michael continued: “The Germans remember 1918. Hence their U-Boat campaign, by which they have sunk some 70,000 tons of British shipping in the first week of war. Our navy will smite back and reduce the total… but the submarine can be defeated on every square foot of British soil as well as on the high seas.

“So the order the Evening Standard gave a week ago must be rammed home: Dig For Victory.”

Across Britain, councils rescinded bye-laws that banned keeping livestock, and small co-operatives sprung up to tend to hens, pigs, rabbits and beehives. For those with a sweet tooth, the sugar ration could be overcome by jars of home-produced honey.

In the Blitz-wrecked East End, neighbours got together to form their own allotment clubs.

By 1942, The Bombed Sites Association had the task of turning spaces where homes once stood into rows of edibles. It garnered wide support: Oxford University donated tools, while a well wisher from Brazil, who heard about the Association on the World Service, sent £5.

Another supporter was the Holborn-born theatre promoter JP Mitchellhill. The owner of the Strand Theatre, he was friends with the author JB Priestley and shared the same “deep-rooted social consciences,” writes Daniel.

Mitchellhill had spent some of his fortune in building a home for blind people in Kentish Town, which he also used to house bombed out Blitz victims. He turned its gardens into allotments and then made large donations to East Enders doing the same. By 1943, the Bombed Sites Association had 300 allotments and enough land for 4,000 rabbits, 2,000 chickens, 10 pigs, nine goats and some ducks and geese.

As Daniel’s excellently researched and gorgeously detailed history reveals, by 1943 the UK imported only a fraction of the food compared to five years previously. This could only be offset by a huge rise in home-produced food. The figures are impressive. The total area of land used for vegetables had rocketed from 12.9 million acres in 1939 to 19.8 million in 1944. By 1945, wheat production was up by 36 per cent, greens by 50 per cent, cereals by 66 per cent and potatoes by 80 per cent.

While we face a different set of circumstances regarding food miles, and a different set of problems in encouraging home growing, the Dig For Victory campaign remains a shining example of the benefits of tending a vegetable patch.

• The Spade as Mighty as the Sword: The Story of World War Two’s Dig for Victory Campaign. By Daniel Smith, Aurum Press, £16.99