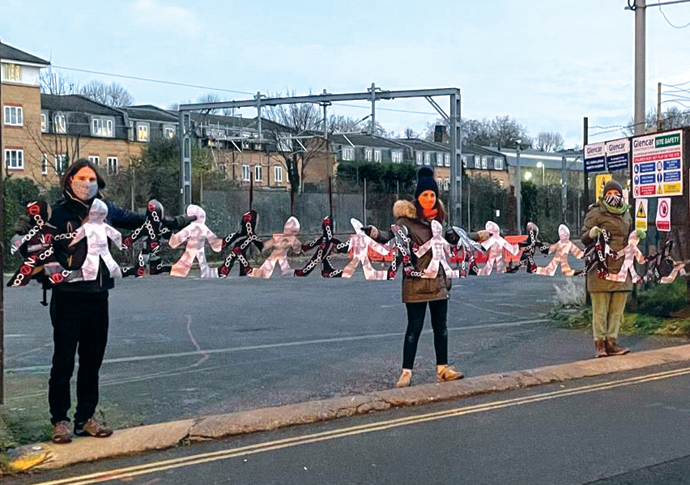 A PROTEST against food delivery giant Ocado was staged this week after building works began on its site in Tufnell Park.

The demonstration early on Monday morning follows a long-running dispute over whether the company should be allowed to use the Bush Industrial Estate for a depot and distribution centre.

Campaign group Nocado – made up of people living nearby and families at Yerbury Primary School – fought these plans and Islington Council last year revoked permission for the site to be used this way.

Objectors said noise and pollution levels would be unfair on residents and children at the school.

A small group of campaigners made a paper chain of people and held it in front of the industrial estate as workers arrived on site.

Natasha Cox, from Nocado, said: “We had to be creative in how we symbolised all the people and children who couldn’t turn up in person due to social distancing. I think we did that quite well. 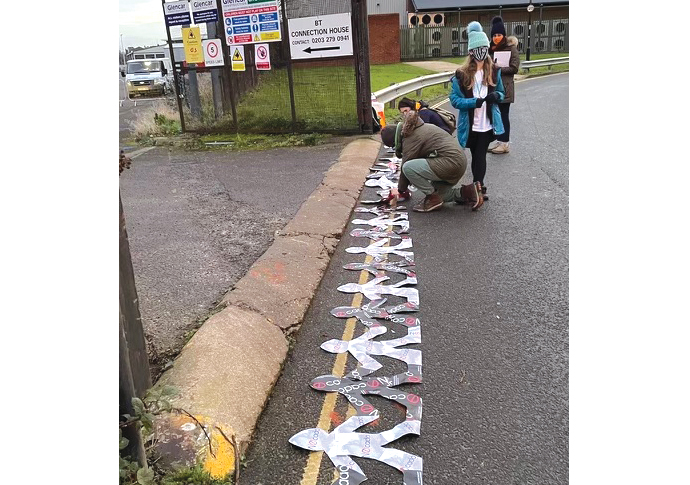 “We feel they have pushed the rules every step of the way. Fundamentally they are doing non-essential works in a lockdown right next to a primary school teaching 40 children with windows open. That shows how little consideration they have for our community.”

Although the majority of pupils are learning from home during the lockdown, schools are still open to the children of key workers and those considered vulnerable.

Cassie Moss, the headteacher at Yerbury, said: “I am somewhat perplexed – despite the council questioning the legitimacy of the use of the site, and despite going to a hearing in the High Court, Ocado are still investing, still pushing on, regardless of the concerns surrounding their development.”

She added: “It is early days with regards to the new contractor going in from 8am to 6pm, however the fact they are warning us that there will be disruption is concerning. During these incredibly challenging times, we do not need this additional complication to distract us from our duty to safeguard our most vulnerable children whilst also providing high quality remote learning for all of our children. The current situation is challenging enough.”

The council has launched a planning enforcement case and says it is keeping an eye on the works.

Council leader Labour councillor Richard Watts said: “The position of us councillors overall is we don’t think this is the right site for a distribution depot.

“We are up for the fight on behalf of the local community but we have to do it to ensure the rules are followed and we can’t exceed what limited powers we have in law.

“Given the council’s deep concern of having a distribution hub next to a primary school, we will seek to ensure at every stage that Ocado stick to the rules and can’t exceed what they have the legal right to do.”

A spokesperson for the Ocado group said: “We are in the process of updating the security fencing and gates at the Bush Industrial Estate site, in line with planning permission.

“We are adhering to the working hours and noise levels set by Islington Council; additionally, we are ensuring that the work closest to Yerbury School is being done outside of school hours. To further minimise the impact this may have on our neighbours, we have installed acoustic barriers around the site, which are reducing noise levels.

“We have notified our neighbours about this work, and invite them to contact us directly if they have any concerns.”