‘The number who participated has reminded us how passionate people are’ 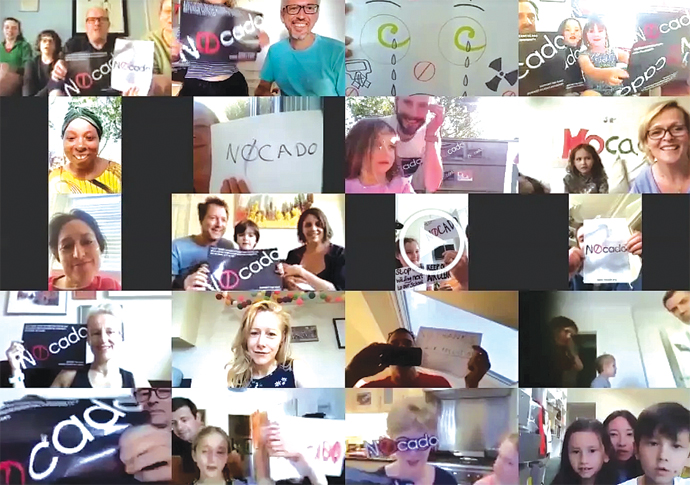 MORE than 100 people logged on to join an online protest against a proposed Ocado distribution hub and diesel refuelling station that could be built next door to a primary school.

The food delivery company had come under fire before the coronavirus lockdown for its plans, which could see up to 100 vans making two trips a day from the site nextdoor to Yerbury Primary School in Archway.

In response to a backlash from parents and clean-air activists worried about the impact on air pollution and community health, Ocado offered to run a fully electric delivery fleet from the industrial estate – a suggestion that depends on council and UK Power Network (UKPN) support.

Once the council receives more details from both UKPN and Ocado as to the feasibility of the electrification proposal, the plans will once again go out to public consultation.

Fenella Grey, of protest group Nocado, said the group was determined to rebuild momentum, as construction continues on the site during lockdown.

“This online protest and the number who participated has really reminded us of how passionate people are about this issue,” she said.

“This will be the first of a number of protests. We want to build momentum again around this campaign. We will meet as a campaign and review how the protest went. We want to get ideas from the community.

“Local schoolchildren have been writing to Ocado chief executive Tim Steiner, and we want to give them a platform to express their views about this proposal.

“This is such a relative issue now. People are concerned about national community health, and this type of development is completely contrary to that principle.”

Council leader Richard Watts has previously voiced his opposition to the plans.

He said: “We remain strongly opposed to any proposals which would lead to an increase of highly polluting vehicles around Yerbury School.

“Following the promises Ocado had made before the Covid-19 crisis began, Islington Council are still waiting to see how they plan to fully operate the site with only electric vehicles.

“We are waiting to hear back from them, bearing in mind the concerns raised by the community. But I cannot see how Ocado can address these concerns and I think they should reconsider their position.

“During the period of crisis, Ocado have a responsibility to protect their staff working on the site and must ensure staff are adhering to all government guidance, including social distancing.”

Details of forthcoming Nocado protests will be published by the campaign group.

The Tribune contacted Ocado for comment but had not received a reply as we went to press.