Rapped attention as Doherty drops in for jam session 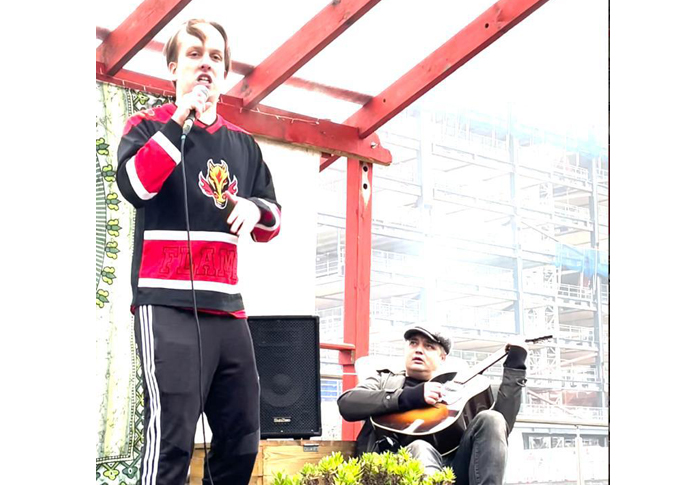 AN aspiring rapper “rocked the boat” during an impromptu performance with one of the music stars of the noughties.

Gabriel Rogers-Mullen – also known by his stage name Solar Flight – was shocked to find himself on stage with Pete Doherty, the former frontman of The Libertines and Babyshambles last month.

The 21-year-old, who has been rapping since he was a student at Central Foundation Boys’ School, has recently taken to performing across London’s open mic circuit.

He had set up to perform at Bards on Boats, a floating performance space temporarily moored near Coal Drops Yard, on a grizzly December day when all of a sudden Mr Doherty popped up. He had been walking past earlier by chance.

“He started talking to me like he was an ordinary guy, he didn’t act famous,” Mr Rogers-Mullen said.

“Just before he got up on stage he said ‘do you want to perform with me?’ I said ‘sure, that sounds cool’.”

A crowd then gathered on the towpath as Mr Doherty performed his set.

“He had his dog play with him on stage, he was whistling and his dog joined in. The audience loved that, it was their favourite bit,” Mr Rogers-Mullen said.

Afterwards, it was Mr Rogers-Mullen’s turn on stage.

“I was performing, and he was playing guitar. He was really enthusiastic, he really liked when I did political lyrics.

“I think he liked the poetry of it because he’s quite well-read,” he said.

“We played for ages, we were on stage for at least half an hour. Some of the songs lasted for a really long time. It was a jam session.”

Mr Rogers-Mullen had never performed with a guitarist before.

“We were both freestyling together. It matched really well, but in a different way. People stopped and were filming it and cheering,” he said.

“It’s made me more interested to try new things with my music,” he said. “Also, interacting with the crowd – I’ve started having more fun with the audience.

“When you first start out as a performer, you’re nervous. But even if you want to present a serious persona you still have to enjoy it.”

The spontaneous set was recorded by the boat’s captain, Eric Ellman.

He said: “Pete played for half an hour with the kid, and then before he leaves, he walked up to Gabriel and said: ‘Hey, man, look, I can’t promise it will lead to anything, but I’ll give you some studio recording time. You want to go down to the studio and record?’ So I think they’re going in to record this weekend.”