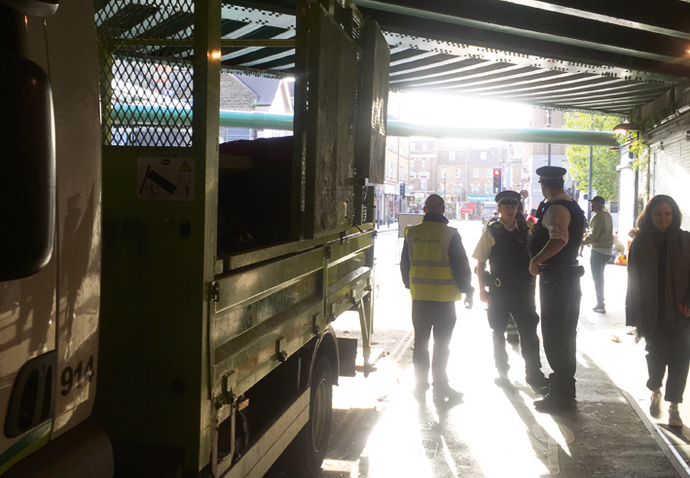 THE Town Hall has been accused of a “heartless” approach to dealing with homeless people after throwing away mattresses and sofa beds belonging to rough sleepers in Finsbury Park.

Homelessness has been on the increase in the area over the past few years, with a number of people sleeping under the railway bridge in Stroud Green Road being particularly prominent.

Last week, an Islington Council rubbish truck, backed by police officers, cleared the area early in the morning, at a time when many of the homeless community are not around.

Several people tried to intervene, but were told by police that there had been reports of “aggressive begging”.

One woman, who lives in the area, said: “I saw the rubbish collectors taking anything they found under the bridge and dumping it into the truck. Everything they had was gone, even things like the sanitary products. I asked whether there could be a compromise. We were told there has been aggressive begging in the area but that’s from people from further up Stroud Green Road.”

One of the women who has been living under the bridge, who calls herself Blue, said a similar thing had happened five or six times in the two years since she had been there.

“This is all the stuff I have in the world,” the 27-year-old said, pointing at her mattress, sleeping bag and a teddy bear – much of which is donated by members of the public.

“It’s ridiculous, especially with winter coming, but there’s nothing I can do. A guy further up the road was sat on his suitcase so they didn’t take it.”

The council said that unattended mattresses, sofa beds and other items have been removed from under the bridge by their street cleansing team, but said personal possessions have not been removed at any point, including sleeping bags.

Islington Council’s housing chief, Labour councillor Diarmaid Ward, said: “We’re seriously concerned about the health and wellbeing of anyone sleeping rough in Islington. We offer support to all rough sleepers in the borough, many of whom are vulnerable or have complex needs.

“The number of mattresses and other items of furniture has started to grow recently and we have had to remove them for safety reasons. We do not take these decisions lightly and recognise the often extremely difficult situations the people sleeping here are facing. This is why we are working tirelessly to help them off the streets and into safer environments where they can access the support they need. We don’t remove anyone’s personal possessions and support is always offered to individuals first.

“We will continue to closely monitor the situation, and are actively looking at longer-term solutions. If residents see someone sleeping rough, they can help connect them to local services via streetlink.org.uk.”