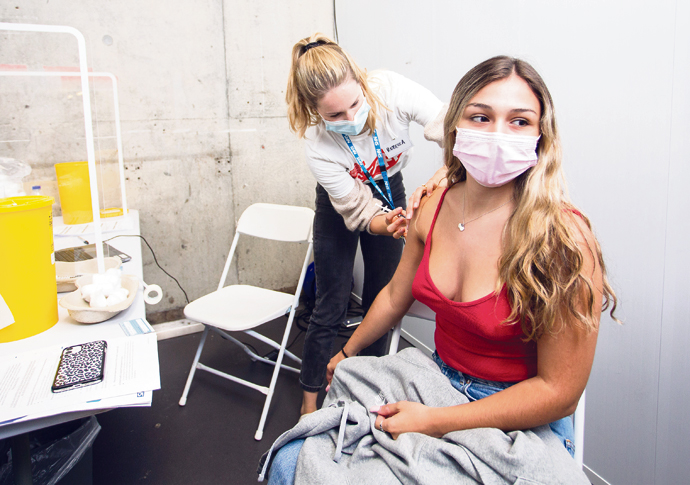 Thousands were vaccinated at the Emirates Stadium last month

COVID cases are sharply rising in Islington with the virus spreading most among young people, the Town Hall heard on Monday evening.

In a briefing for councillors, Islington’s director of public health Jonathan O’Sullivan said that he did not think the numbers would quickly fall.

The good news, he said, was that there had not been a coronavirus death in the borough for ten weeks.

But he warned the threat of long Covid was still there – including for younger patients.

In a startling anecdote, he said he knew of two people being treated in hospital with the virus, even though they had already had two doses of a Covid vaccine.

The weight of cases now being recorded meant these unusual incidents would occur, he told councillors.

“We have seen a very large increase in infection rates particularly amongst the 20 to 29 year age group, to an extent the 30 to 39 year olds, and also among our secondary school-aged children,” he said.

“But you can’t have this level of community infection without it having an impact on older age groups.

“When I saw colleagues at the Whittington last week, they said the day before they had two over-70s coming into A&E, very unwell, both double vaccinated and who they had needed to admit.”

Mr O’Sullivan said: “The fact they had been double vaccinated means it is highly likely that they will be vaccinated against the worst possible outcomes, but it does show you that when there is so much infection, even the people who have been double vaccinated – they’ve done their bit around staying safe and helping to keep other people safe – you will still have some of those admissions.”

On long Covid – the post-viral condition which even some young and healthy patients have found can be debilitating for months or even for more than a year – Mr O’Sullivan warned: “Long Covid does not respect age and there will be people who have the long term consequences, not just of this new wave coming through but also the first and second ones.”

He told councillors that he believed that case numbers would stay high potentially until the middle of next month with uncertainity about what may then happen in the autumn and winter.

There was still need for people to come forward for vaccines, the meeting was told, and concern has developed over a downward trend in take-up in recent weeks.

“One of the frustrations for me is that the NHS has been absolutely outstanding throughout this whole period, they’ve carried on and on, but not having as many community pharmacies or really easy drop-in locations where people might come in for other things and then have that conversation – ‘oh, have you had your Covid vaccination?’ – we just haven’t had that through this,” said Mr O’Sullivan.

More ‘pop-up’ vaccine sites were planned, the meeting was told, and people would not have to go through the NHS booking system or give information like the address of a GP or their immigration status.

“We know that there are significant figures in government who are pretty unbothered about young people catching the virus,” she told the meeting. “You know, we’ve heard people reporting people saying ‘let it rip’ and things like that, but we know that black people and young black people are much more likely to be worse affected.”

Cllr Lukes added: “The worry I have is if we don’t make a big push now in the next two months, we’ll be into the autumn and thinking about booster vaccinations – and we’ll have lost a chance to do a lot of the vaccination that we can do now.”

Labour councillor Jenny Kay called for clearer information on vaccine rates to be made available.

You can track infections jump to when the football was on… 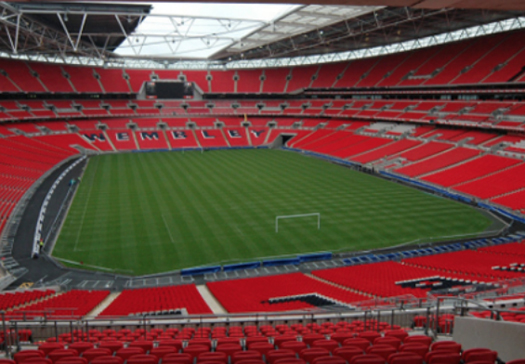 IT was a mesmerising month, a festival of football which saw England come so close to winning a major trophy after 55 years of waiting.

But the excitement has come with a cost, Islington’s director of public health believes.

Jonathan O’Sullivan told Monday’s meeting: “What we are seeing is a bit of the impact – let’s be frank – of the Euros and the way, as large events, they brought people together.”

“Not just at the events themselves but actually the indoor mixing that happened ahead of the full stage of the easing of lockdown.”

He added: “At one point I could see the data almost on a daily basis to track back and see when the matches actually happened. I’m not a football follower, but you could see it.”

England lost the final of the Euro 2020 tournament – played a year late – to Italy in a match played at Wembley (above) on July 11.
Health teams, however, are now looking to use the power of football to have a positive impact on the course of the pandemic.

Cabinet councillor Sue Lukes said there were plans for a second mass vaccination event at Arsenal’s Emirates Stadium between August 7 and August 10.

She recommended enlisting DJs to play music in order to attract younger residents.

Almost 9,000 people got a jab at the first four-day event staged at Arsenal’s home ground.