Inspired by The Canterbury Tales and a passion for cave paintings, DM Dickinson certainly has a story to tell, says Jane Clinton 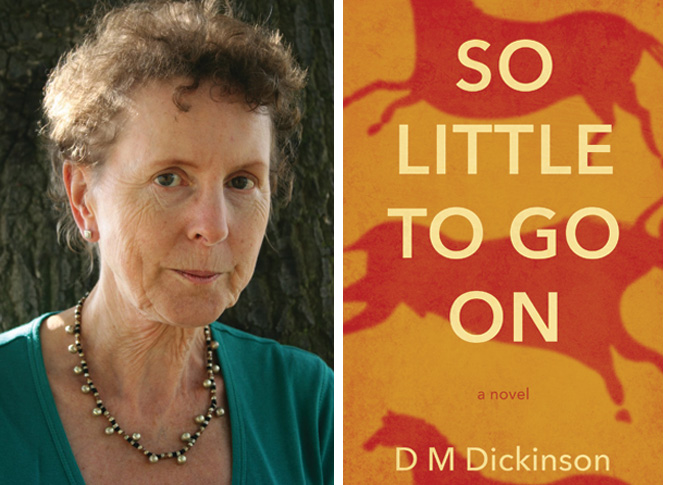 A MILITARY coup, a random group of people, a treacherous escape journey and shared stories about early cave paintings.

These elements make up the novel, So Little To Go On, by Gospel Oak author and filmmaker DM Dickinson.

The reader meets the disparate group assembled at an airport in Africa as they realise they have missed their last flight out.

They decide to begin the three-day 50-mile walk over inhospitable terrain to safety.

With little supplies and a group with varying degrees of fitness it wouldn’t be easy. To distract them they agree to take part in a storytelling game with each imagining the origins of the Palaeolithic-era Lascaux cave paintings situated near the village of Montignac in south-west France.

One of the group throws down the storytelling gauntlet: “Who were the artists of the Palaeolithic era and why did they paint in caves?”

And so we hear each person’s interpretation as their imaginations run free. Some come to the game with enthusiasm, others are reluctant narrators.

Then there is the main story: will the group reach their destination safely?

The extraordinary cave paintings, which number around 600 and have depictions of animals and fauna, were discovered in 1940. Estimated to be 17,000 years old, they were closed to the public in 1963. Then in 1979 they were inducted into the Unesco World Heritage List.

Dickinson had a fascination with the caves from a young age as she saw them while leafing through EH Gombrich’s seminal The Story of Art.

“The images of the cave paintings really captured my imagination: the intensity of them, the vividness of the colours before they faded, and the liveliness of the animals. They have this naturalistic look and there is a sense of the actual living animal in front of you.”

She was also lucky enough to see them in situ in the early 1960s when she hitchhiked around France.

“Seeing the cave paintings in real life had an enormous effect on me. It’s an absolutely amazing place.

“Things that happened to you early in life hover about in the back of your consciousness. If there was an article in the paper about cave paintings or new discoveries about the Paleolithic culture, I would read it. These stories kind of coalesced and then came the idea of this novel.”

DM Dickinson whose real name is Margaret Dickinson – she uses the former to differentiate her from another novelist with the same name – is perhaps best known locally for her part in campaigns to keep open and accessible the swimming ponds on Hampstead Heath as well as the book she organised and edited, Wild Swimming Walks.

But she began her career in filmmaking working on, among others, the cult 1960s series The Prisoner as well as the 1966 film Grand Prix directed by John Frankenheimer.

She went on to become a documentary filmmaker and has had a long association with Africa, which began with support for anticolonial, antiracist movements.

Her subsequent work involved prolonged spells in Africa and India.

She had her own dramatic experience while directing the 1971 documentary, Behind the Lines, which she was making when Mozambique was fighting for independence from Portuguese colonial rule.

“When we started planning the film, the guerillas were winning and the Portuguese efforts to suppress the movement were pretty feeble. And this new offensive by the Portuguese took everybody by surprise.

“They knew we were there and they were looking for us. I was terrified. We had to move on every day so the Portuguese would never quite know where we were.”

They walked for two weeks with the guerrillas carrying the filming equipment. “The Portuguese controlled the roads, so we paddled across the river. The only way of getting about was walking. I spent many days walking with the guerrilla fighters.”

She recalled this for the journey endured by the group in the novel.

So Little to Go On nods gently to Chaucer’s The Canterbury Tales where pilgrims walking to Canterbury from London engage in a storytelling contest which also helps pass the time.

Dickinson passionately believes in the power of storytelling and that sharing stories with each other could benefit us all.
“It’s a very enjoyable way to pass the time,” she says.

“If only people were less stuck into their computers and mobile phones, more people would be telling each other stories.

“Everybody has stories in them, sometimes invented ones, sometimes the story of their life and it’s nice to bring them out.”