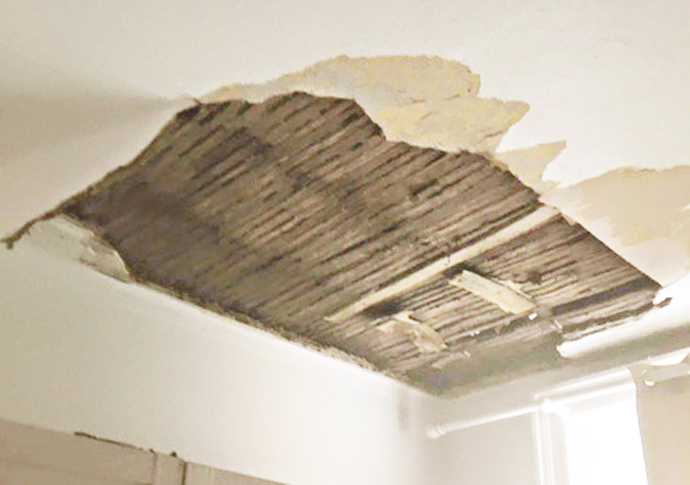 A MOTHER says she wishes she had never moved to her Angel flat after battling her landlords for over a month to fix a collapsed bedroom ceiling.

It was only by chance that Abi Whitehouse’s 16-year-old son was not sitting at his desk below the ceiling when it fell.

The issue has not been resolved more than a month later. “It’s been incredibly stressful,” Ms Whitehouse said.

Ms Whitehouse has had to pay full rent despite the bedroom being unusable.

Three separate workmen attended the property and told her the room is not safe to be used. None of the men was able to make it safe due to the extent of the damage.

Ms Whitehouse has been forced to find alternative sleeping arrangements and her son is currently sleeping in their kitchen.

She said: “He’s just lost. Every 16-year-old spends every second of their time in their bedroom. He said that even when it is fixed, he is too scared to go back and sleep in his room.”

The landlords are Partners for Improvement, a private consortium which has a long-term contract to manage council repair works.

A spokesperson for Partners for Improvement in Islington said: “We would like to apologise to Ms Whitehouse as the service she has received has fallen below our normal high standards.

“Our priority in this case was making sure she and her family were safe, however our communication since the incident should have been much better and for that we are sorry.

“We have put temporary boards on the ceiling and are making arrangements to permanently fix the problem as quickly as possible.

“We are going to confirm an offer to Ms Whitehouse including a calculation for the loss of room, based on the Council’s policy, and an additional goodwill gesture.”