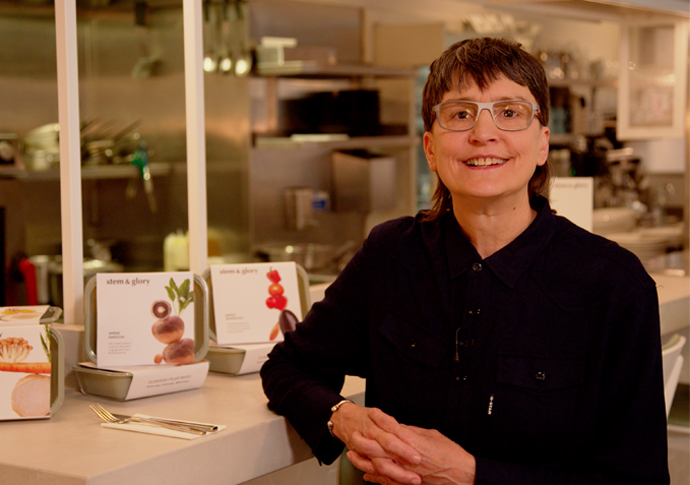 Louise Palmer-Masterton: ‘Even if you’re not vegan, you know it’s the future’

COULD beef burgers one day become a thing of the past? A vegan restaurateur who has looked in to the future says she is convinced its plant-based – and wants big business to get on board with the times.

Louise Palmer-Masterton, a dedicated vegan since her teens when she realised how “cruel” factory farming was, is behind Stem and Glory restaurant between Barbican and Smithfield, which opened in 2019 after a crowdfunding appeal. She is now hoping to open a new vegan restaurant in Broadgate, near Liverpool Street, in April.

The entrepreneur is attempting to raise up to £1million for the enterprise, with the hope that individual investors will see a return on their investment as veganism grows in popularity.

Ms Palmer-Masterton said: “Even if you’re not vegan, you know it’s the future.

“It’s my mission to stop people eating animals, but the lack of sustainability behind animal agriculture is a new reason – if people aren’t turning vegan for the animals they’re doing it to be more sustainable.

“At the least they’re cutting down.”

She added: “There’s a lot of vegan food out there but there is a lack of contemporary fine dining – no one is really making much noise in that space. But where we are there is a city crowd – and people want to make sustainable and healthy choices that are also interesting and delicious.”

If everyone cut down two meat meals a week that was the equivalent of keeping two cars off the road, Ms Palmer-Masterton said, adding that meat eaters have a carbon footprint up to 50 times larger than vegans.

She praised Veganuary – a drive to get as many people as possible to go vegan for January – but warned it takes longer than a month for your body to properly adjust to no meat and dairy.

While she saw opening vegan restaurants with individual investors as “pioneering”, she said the industry overall needs to see a change in how vegan and vegetarian restaurants are funded – and warned that without bigger industry backers some restaurants will always suffer as they don’t have deep enough pockets to compete with chains.

She said: “Big investment is still scared – they’re tiptoing around us and have been for a while – but it’s only a matter of time before they become interested in more plant-based food.

“At the moment it’s still quite tokenistic, and hospitality investment need to take it more seriously. People are serious about becoming more sustainable.”

She admitted that while vegan restaurants have sometimes had a slightly uncool “hippy” tag historically, they had now moved into a “far more interesting contemporary” space, and said she looked forward to a “burgeoning” plant scene that was “growing exponentially”.