‘They’re trying to squeeze every penny out of us’ 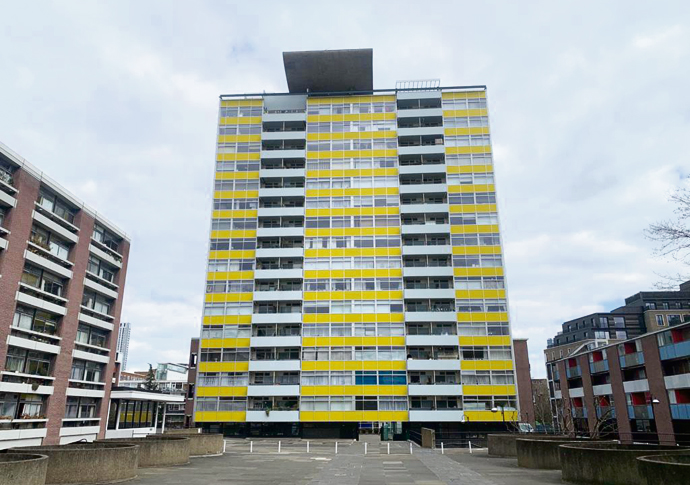 LEASEHOLDERS in what was once England’s tallest tower block are locked in a legal battle with the City of London Corporation over cladding works.

Residents in the Grade II-listed Great Arthur House, on the Golden Lane Estate, face a bill of around £8million – more than £70,000 per flat – for the replacement of cladding and structural repair work.

And they told the Tribune that this was only the latest in a series of issues they have with the City as a landlord, and the eye-watering bill would be devastating for many.

Leaseholder Jayne O’Connel, who lives in a one-bedroom flat with her 14-year-old daughter, said: “The City has absolutely zero time for its residents, we are treated with complete disregard.

“When I think about our situation I almost cry. It’s just one problem after another.”

The 16-storey block was briefly the tallest building in the country when it was completed in 1959 as part of the post-war effort to regenerate the Barbican area after it was flattened by bombs.

It was initially all council homes but around 50 per cent of the flats in Great Arthur House have now become privately owned through “Right To Buy”.

The block, which has 120 flats, was listed by Historic England in 1997, but a report in 2002 came to some damning conclusions about the condition of the building.

The standard of construction of its aluminium framework was “poor at a significant number of locations” and no allowance had been made for “thermal movement” – when hot and cold weather causes building fabrics to expand and contract.

The block has suffered from links and over the years this caused the framework to “deform” which then led the cladding to leak and windows to become unsealed, allowing rain to enter the flats.

Regeneration work costing around £8m was completed in 2018 and it was at this point that a group of leaseholders cobbled together legal fees to contest the bill that the City had shifted on to them.

In a tribunal, the leaseholders argued that it was the landlord’s responsibility to fix the problem as the issues stem from structural faults that were inherent from the original work. A judge ruled in favour of the leaseholders. The City then took them to an Upper Tribunal which ruled against the Corporation in 2019.

City lawyers then took the case to the Court of Appeal and a ruling was published last month where a judge again rejected the Corporation’s argument.

Now, a City spokeswoman has confirmed that lawyers have applied for the case to be heard at the Supreme Court.

Dr Clive Egan, who has lived in Great Arthur House for more than two decades, said: “I think the City is probably the richest local authority in the world and yet they try to squeeze every penny they can out of their residents.

The Golden Lane Estate sits right on the border of the City of London and Islington Council along with the Barbican. The City is extending the estate over the border into Islington with the construction of a new tower block and an academy school.