Campaigners say there must have been other ways to restrain man 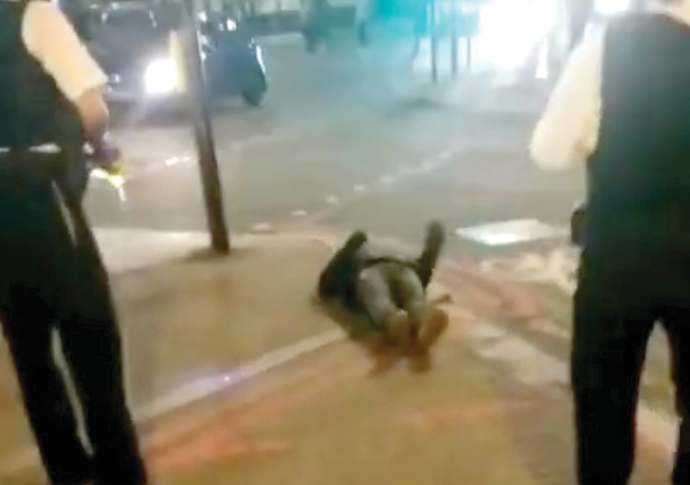 Footage of the Taser incident was shared on TikTok [@dz16beo]

POLICE have been challenged over their use of a Taser gun to restrain a man in Finsbury Park after footage of the incident was shared on the internet.

The film, uploaded to the TikTok social media site, shows part of an incident which led to the arrest of Siyr Sisey outside the underground station in Seven Sisters Road.

The 22-year-old was later arrested for threatening behaviour, common assault and assault by beating of an emergency worker.

He was sentenced at Highbury Magistrates’ Court to 18 weeks in prison after being found guilty on all three charges.

He did not appear in court earlier this week to hear the proceedings.

The nature of his arrest in October, however, was still being discussed on the internet as film of the incident gathered more views. At one stage, Mr Sisey can be heard screaming: “I’m dying, I’m dying.”

In the video, Mr Sisey can be seen engaging with two police officers, just outside Costa Coffee near the station.

One officer has a Taser gun trained on his torso. Mr Sisey can be heard talking aggressively to the officers, his speech peppered with expletives. He is later shown to have been Tasered – the force having sent him to the ground.

There appears to be a pool of blood on the ground.

In the video, a crowd gathers around Mr Sisey, with one woman asking the police: “What have you done? Where’s the ambulance?”

Paul Holborow, convenor of the Islington Stand Up To Racism group, said he had been shown the video.

“Whatever this young man has done, it didn’t merit being Tasered,” he said.

“There would have been other ways of restraining him if that were necessary.”

Mr Holborow added: “In the light of the George Floyd death and the subsequent Black Lives Matter movement, it is completely irresponsible that the police act in such an irresponsible, potentially lethal way.”

But police said they were aware of the film that had been shared online but said that the footage only “shows part of the incident”.

Officers had been called to the scene after reports of Mr Sisey’s “violent or threatening behaviour” in a coffee shop, a spokesperson said, adding: “After the man had left the coffee shop, officers were concerned that the man continued to pose a threat.

“A Taser was discharged when the man confronted a member of public at the location, which caused the man to fall to the ground.”

The Met Police said officers gave Mr Sisey first aid at the scene and he was taken to a north London hospital “as a precaution”.

He was later charged and Mr Sisey appeared in custody at Thames Magistrates’ Court at the end of October.

He was remanded in custody and was due to appear at the same court on Tuesday this week.

However, Mr Sisey refused to attend court, and was instead sentenced in his absence.

The Met has around 7,000 officers across London trained in the use of Tasers and is aiming to have 3,000 more able to use them by next year.