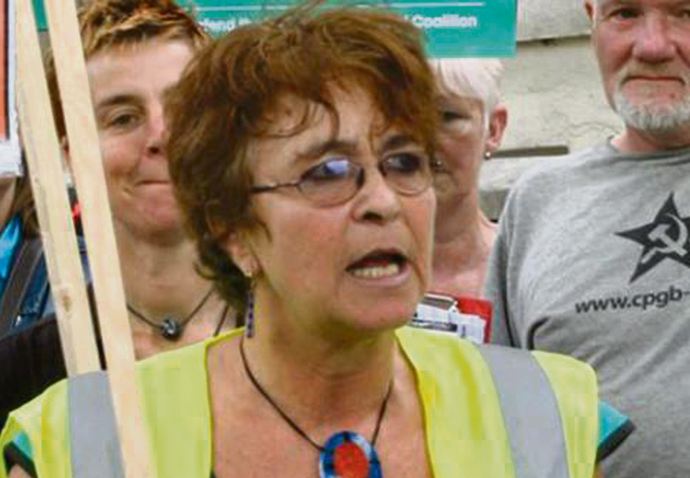 Shirley Franklin of the Defend the Whittington Hospital Coalition

IT is a time of increasing crisis in the NHS.

There is the massive underspending exposed through staff shortages, far too few ambulances and beds, and the forthcoming Health and Care Act is going to facilitate cuts and privatisation.

We need a powerful united fightback led by health unions and local campaigns.

So it must seem like a strange time to be saying that sadly we have decided to wind down our campaign, Defend the Whittington Hospital Coalition. We think it’s time to work in other ways to defend our hospital and the NHS.

From its beginning in 2009, DWHC has been a campaign driven mainly by women. Initially, that was Candy Udwin, Jem Lindon and myself. Then others joined, including MPs Emily Thornberry, Catherine West and Lynne Featherstone.

We are incredibly proud of our achievements and would like to thank everyone for helping us get there, especially Jeremy Corbyn, the late Alice Kilroy – our treasurer and fab banner maker – and the Tribune journalist Tom Foot.

We held regular meetings, branded ourselves with the Whittington cat and slogans like “Don’t Make a Casualty of our A and E”.

Against the threat of closure, we organised a petition and a massive march down Holloway Road, led by a bus supplied by the Islington Tribune, playing jazz with the late editor Eric Gordon at the mic. We provided a colourful defiant spectacle.

One week before the 2010 general election, we held a day of action where local trade unions picketed their workplaces and handed out petitions.

In the afternoon, we gathered outside the hospital, holding green cat balloons. Speakers included even Andrew Lansley, the Tory shadow secretary for health who was planning his diabolically destructive Health and Social Care Act.

The day before we learned health secretary Andy Burnham changed his mind about the Whittington. We had stopped the closure. Sadly a few years later Chase Farm lost its A and E. 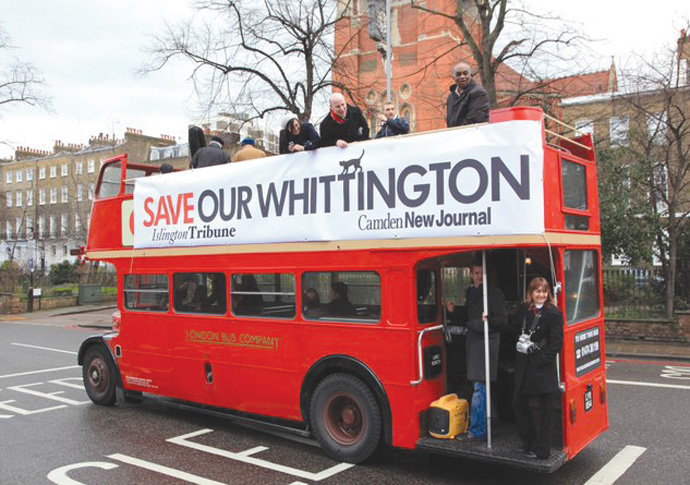 We didn’t go away after this victory. The Tories won the 2010 election and immediately started to publish a Health and Social Care White Paper, which we campaigned against it.

In 2013, Tribune journalist Tom Foot phoned me about plans to sell off nearly half the hospital buildings, get rid of 570 jobs and close hundreds of beds. Stopping the sell-off felt unsurmountable.

But we immediately held a public meeting with well over 500 people in three rooms at the Archway Methodist Hall.

Again, we stormed board meetings and then filled the Holloway Road with protesters. At the end of the demo, there were just two women – Jem and myself – clearing up the discarded placards and demo detritus, in the rain.

Our 2013 protests, with cat balloons and cat masks were covered by the tv and local press. We were so relieved when Jeremy Corbyn told us that he had been told that we had stopped the sell-off.

In October 2017, four months after the Grenfell Fire tragedy, we started another very vibrant campaign to “Get Rydon Out of Our Hospital”.

The board eventually saw the error of their ways and took the company to court to get out of a deal.

Over the years we have campaigned for a variety of NHS-related issues.

In 2011, when I was a governor for the Camden and Islington Mental Health Trust, shockingly they closed down 100 mental health beds. DWHC picketed the Trust building in St Pancras to complain.

More recently, when the Whittington Hospital sold off their hospital site land to the mental health Trust – an appalling decision.

We held a public meeting about the issue. Mental health provision needs a massive fightback to establish a service that actually meets needs.

Islington Keep our NHS Public have said that they would like to keep a monitoring role regarding the Whittington.

They are hoping to be able to continue the regular meetings that we had with management. Our bank balance which is currently approximately £800 will be donated to another health charity such as Patients Not Passports, or Health Campaigns Together.

Our beautiful banners made by Alice Kilroy will be kept in the Tribune’s office. We are hoping to keep the videos and posters on our website. We would like your ideas on what’s next, so we are holding one last public meeting on Zoom on December 7 from 6pm.