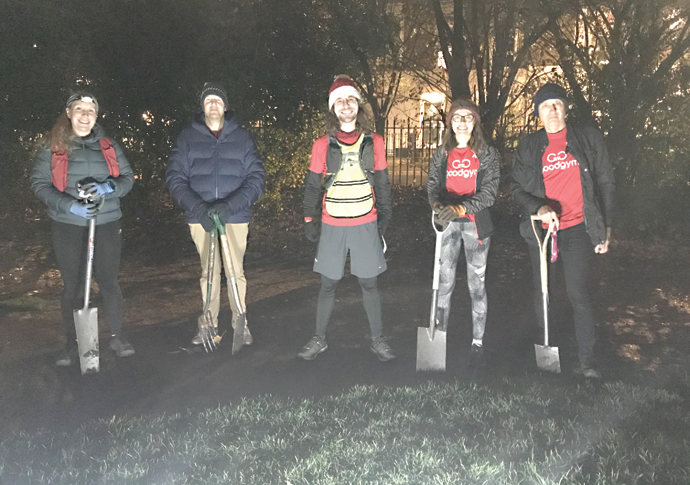 A night session of bulb planting in Thornhill Square

Gardeners in Thornhill Square in Barnsbury received a festive gift of “hundreds” of different bulbs.

Anna McKane, chair of the Thornhill Square Association, said: “The box was amazing, I couldn’t lift it, there were hundreds of all different things: daffodils, tulips, snowdrops, crocuses. It’s so exciting.”

The bulbs came from Taylors of Holbeach, an agricultural company based in Lincolnshire.

“Quite often they need to clear their warehouses, and they seem to have a great many bulbs that they’ve got to get rid of,” said Ms McKane.

“It’s slightly too late in the season to sell them, so they share them out through this thing called the Metropolitan Public Gardens Association [MPGA].”

The MPGA was established in the Victorian Era as a means of protecting and preserving public gardens.

“It was founded in the 19th century by people who felt even then that some public gardens needed a bit more care,” Ms McKane said.

The Thornhill Garden Association (TGA) carries this tradition on today. A volunteer group, the TGA formed about five years ago when residents noticed the garden was getting overgrown.

“I’m not blaming the council, there have just been huge cuts in council funding,” Ms McKane said.

“For example, all over Islington many of the parks had absolutely beautiful rose beds. But a rose bed is a very high maintenance thing.

“They run somewhere, do something fast for half an hour, and then run back,” Ms McKane said. “They’ve been helping us quite regularly for several years. They came with head torches, and they’ve got a portable floodlight which provides light for about an hour. So they got a lot of these bulbs in, which was marvellous.

“Of course there were dog walkers out there, wondering what on earth these people were doing.”

Passersby will be able to enjoy the bulbs from as early as February. “Snowdrops will be in February, and then daffodils will be in March, and tulips in April,” Ms McKane said.