Farewell to Harry, a legend from The Bunk 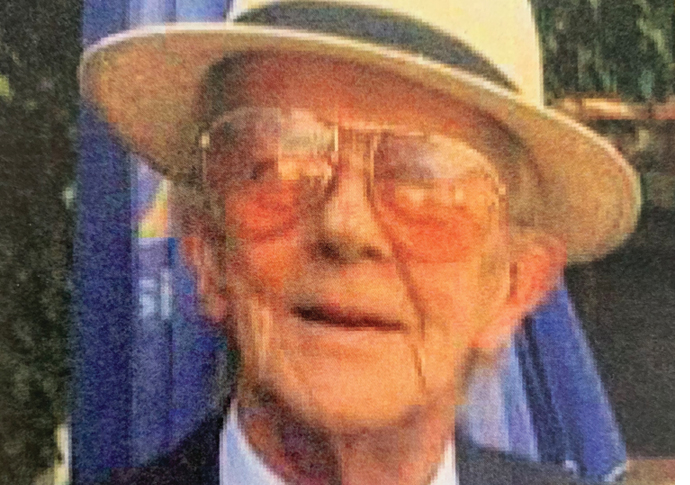 Harry Hicks – ‘Always the one calling the shots’

WHEN Harry Hicks was a young boy growing up around Finsbury Park, he was walking down the street with one shoe on and an older man started shouting at him.

The young boy turned around and said: “No, I’ve found one.”

Mr Hicks was the oldest of four children to Dorothy and Harry Hicks. Young Harry, Frieda, Leslie and Doreen were brought up in Playford Road, in an area known at the time as “The Bunk”.

One of Mr Hicks’s many great friends, Tony Walker, said: “No one had any money in those days. All they had was family. That was always the most important thing for Harry, family.”

Mr Hicks, who died earlier this month aged 79, attended Pooles Park Primary School, but by the age of 14 he was out working.

A few years later he disappeared for several months to work in a travelling fairground. But he was soon back in Islington so he could marry his childhood sweetheart, Diane. 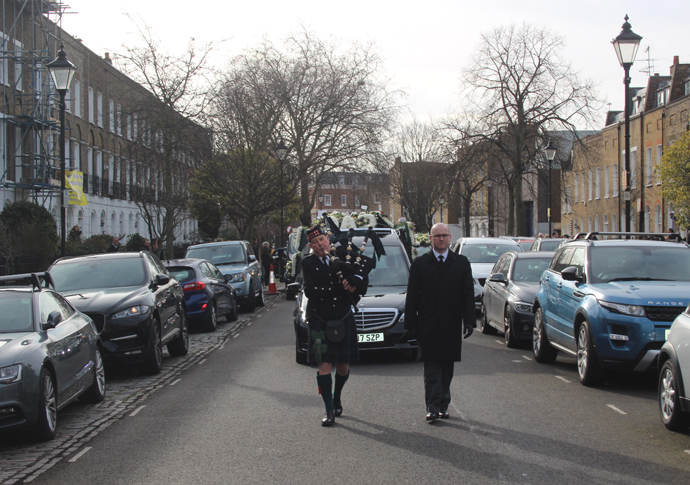 Mr Hicks started scores of businesses around the borough.

In the early 1970s the family moved to Cloudsley Road at Angel where he brought up his five children – Harry, David, Cathy, Dionne and Michael.

Mr Hicks was a “mad Arsenal fan”, regularly going to games at Highbury. He became close friends with Gunners legend Frank McLintock who captained Arsenal to win the double in 1971. 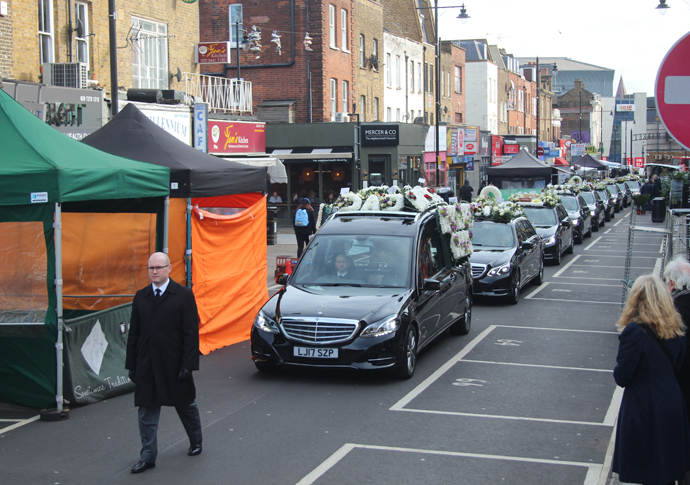 Footballers in the 70s did not earn the astronomical figures they do now and one night when they were having a few drinks, Mr Hicks and Mr McLintock decided to open a pub themselves.

They ran the Sutton Arms in Copenhagen Street, just off Caledonian Road, for almost a decade. It was a regular haunt for footballers looking for a post-match drink.

Mr Hicks’ son David Hicks told the Tribune: “One night Arsenal had been playing Man United. There was the usual Islington tearaways on one side of the bar, and then in walks George Best and Miss World, Mary Stavin. 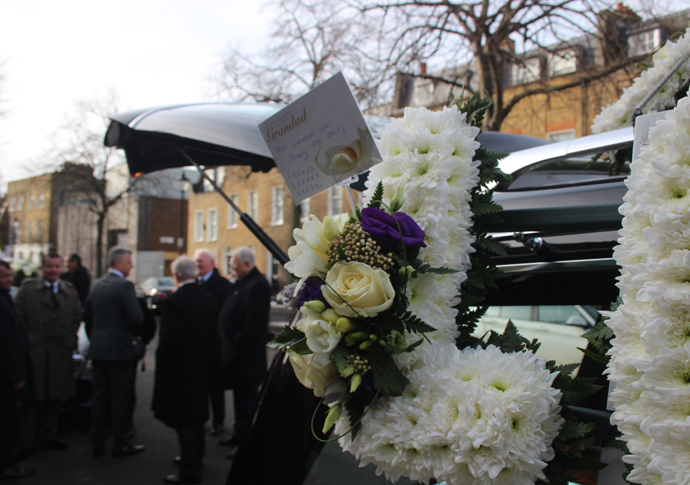 “No paparazzi were allowed in so they had a night. Dad was never nervous or shy – he had more front than Marks and Spencers.

“He was always the one calling the shots. He was a legend in my eyes. A lovely dad and a wonderful grandad.”

Mr Hicks also frequented exclusive clubs in the West End. He had a table in the famous Tramp club and his favourite singer was Frank Sinatra.

“Dad always had an idea for a business and he could sell anything,” added David. “There used to be these egg timers with sand in them. You’d stand them up and the sand would fall down, lasting a minute. Well, dad bought a whole load of these egg timers, but there was no sand in them. He still managed to sell them.”

He also raised thousands of pounds for different local charities.

Family and loyalty were what mattered most to Mr Hicks.

One time a friend told Mr Hicks that a judge was due to sentence him the next day and he expected it meant jail. Mr Hicks told him to follow him down to the Thames. There Mr Hicks jumped into the river and his friend had to go in after him to save his life until police and paramedics arrived.

The next day, the judge decided not to send the man to prison because he had just ‘saved a man’s life’,” David said. 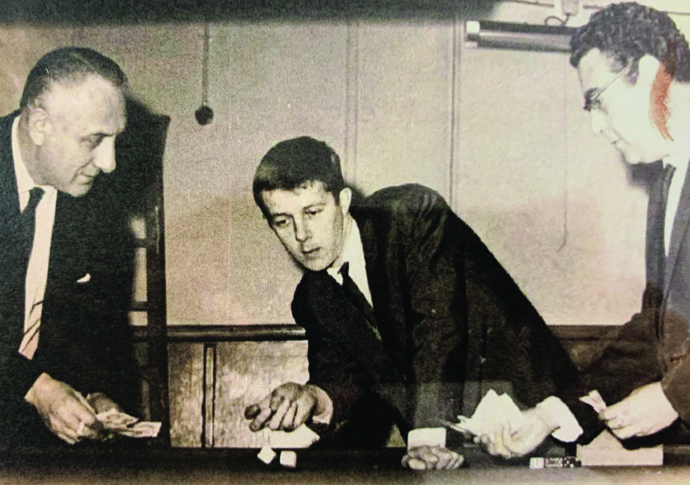 Mr Hicks loved spending time with his 19 grandchildren. But tragedy hit the family in 2014 when David’s 18-year-old son Henry Hicks died in a crash on his moped while he was being followed by the police.

The family remain with the Met and last week refused to accept an apology. Mr Hicks was devastated.

In the last few years of his life, Mr Hicks enjoyed going to horse races, often driven there by Mr Walker, known as “Taxi Tony”.

“Every Monday I would take him to Windsor. He was always with the owners and he knew all the jockeys. They loved him. His death is the end of an era.”

His funeral was held at the Holy Redeemer church in Clerkenwell on Tuesday. 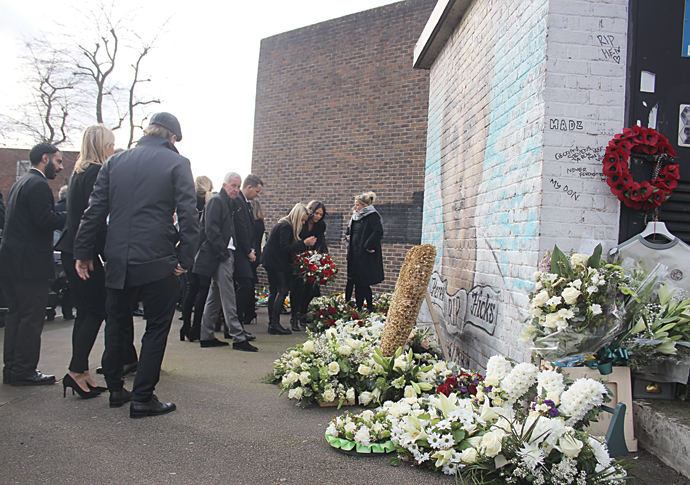 A HUGE funeral parade carried the body of Harry Hicks through Angel and Clerkenwell as hundreds of mourners came to pay their respects to an “Islington legend”, writes Calum Fraser.

A line of up to 20 black limousines followed a hearse from Cloudsley Road where he lived with his wife Diane for more than 50 years, up Chapel Market past pitches he used to run stalls from and down Amwell Street to the Holy Redeemer Church in Exmouth Market.

Mr Hicks was an iconic figure in the area and he once ran the Sutton Arms pub in Copenhagen Street with former Arsenal captain Frank McLintock.

David Hicks, Mr Hicks’ son, told the Tribune: “He was a legend. He loved his family, his children, his grand­children, we were the world to him.

“My heart is broken, and now we have to try and live on without him.”

A bagpiper lead the coffin down Cloudsley Road and then into the church.

Tony Walker, who drove Mr Hicks round for more than 30 years in his taxi, gave a eulogy at the funeral service.

“Harry was like a second father to me,” he said.

“You were one of the best without a doubt. God bless, sleep tight my friend. You shall be sorely missed.”

Mr Walker told a story about a time when Mr Hicks called him up and said “come on son, put on your suit”.

They were going out. The pair drove to the famous Tramp nightclub in Mayfair where Mr Hicks had a regular table.

Mr Hicks led Mr Walker inside, but when they got in the lead singer of Hot Chocolate, Errol Brown, was sitting in Mr Hicks’ regular seat.

He said: “The maître d’ leaned over in his [Errol’s] ear and said, ‘do you mind getting up, you’re in Harry’s seat’. With that he got up.”

Mr Hicks then ordered a bottle of Cristal champagne and the pair sat down and “laughed the night away”.

Later Mr Walker told the Tribune: “Harry was an incredibly generous man. I spent 35 years dropping people off at top venues in London, but Harry would take you in.

“Everyone got with Harry, even the road sweeper got a £20 tip. It was like going into a fairground and you can go on any ride and all of it was free, he’d pay the whole lot.”

After the service in Exmouth Market, Mr Hicks’ body was taken to Islington Crematorium.

Later, scores of floral tributes that had been brought by mourners were laid at the mural of his grandson Henry Hicks in Wheelwright Street.

Henry died after his moped crashed while he was being followed by police in 2014.

A wake for Mr Hicks was held in the Crown Pub in Cloudsley Road.