‘Give empty prison flats to homeless’ 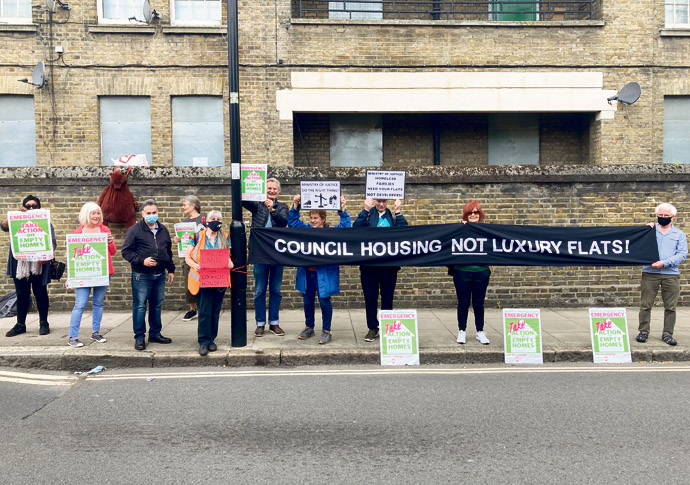 Campaigners gathered outside the Pentonville flats in Wellington Mews on Saturday, calling for the empty properties to be used to ease the housing crisis

ISLINGTON’S housing chief is calling on the government to agree to a plea to allow former homes for Pentonville Prison staff to be let to homeless people.

Demonstrators were outside the block of flats in Wellington Mews on Saturday as they continued to fight Ministry of Justice (MoJ) plans to sell off the blocks on the basis that a future revamp would not have to include new social housing.

Islington Council had negotiated with the MoJ to lease the blocks – mostly three to four-bedroom homes – in 2019 and use them to help house people on the council’s waiting list. But that deal later fell through.

Around 14,000 are on the waiting list, in need of accommodation.

Council planners have rejected applications for “certificates of lawfulness” from developers which would allow them to revamp the block without applying for full planning permission.

Without the certificates, any redevelopment would have to include 50 per cent of homes at affordable rates.

Labour councillor Tricia Clarke said: “It’s been left empty all that time and we think it is a disgrace. For all those years it could have been used for housing homeless people and that’s what we want.” 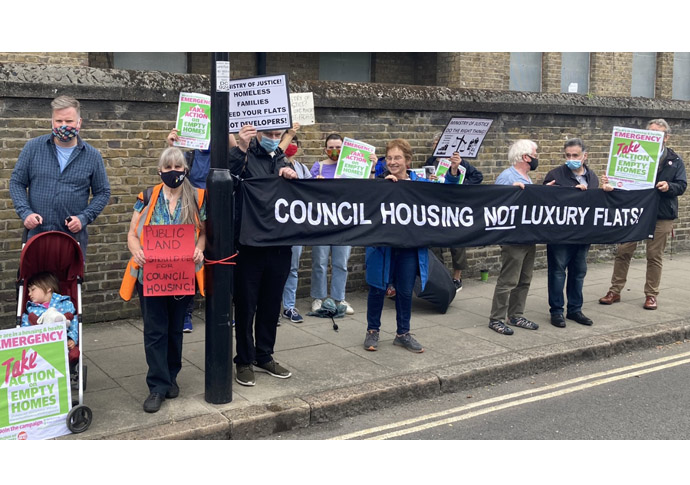 “There’s a desperate need for this. It is public land, and public buildings deserve to be maintained under the public local authority. I am very firmly against public property being sold to private developers as we have seen in other parts of London.”

The protest was organised by campaign group Islington Homes For All whose co-chair Morag Gillie said: “These are three or four-bedroom flats, absolute gold dust – we have got hundreds of families living in overcrowded accommodation. The impact that is having on their mental health, their wellbeing, family dynamics…

“This would have been a fantastic opportunity.”

She added: “I am really, really angry because once again it is putting the need for profit before social need. It’s a government that keeps allowing this to happen.

“We are going to keep on campaigning.”

Islington’s housing chief, Councillor Diarmaid Ward, said: “Doesn’t it absolutely break your heart to see these flats sitting empty for all of these years?

“These are just what we need for our borough for the thousands on the housing list who are in absolute desperate need.

“We actually were on the brink of getting these back. In 2019 we met with the MoJ and we talked to them. We had the papers ready to be signed and the MOJ turned around and said no, did a U-turn and said, ‘We can make more money on the open market.’

In response to questions from the Tribune this week, the Ministry of Justice said they agreed to the sale of the property to a developer last year and the purchase is subject to the buyer being granted a certificate from Islington Council confirming the premises can be used for Class C3 residential purposes. They added that the sale price is commercially sensitive and confidential.