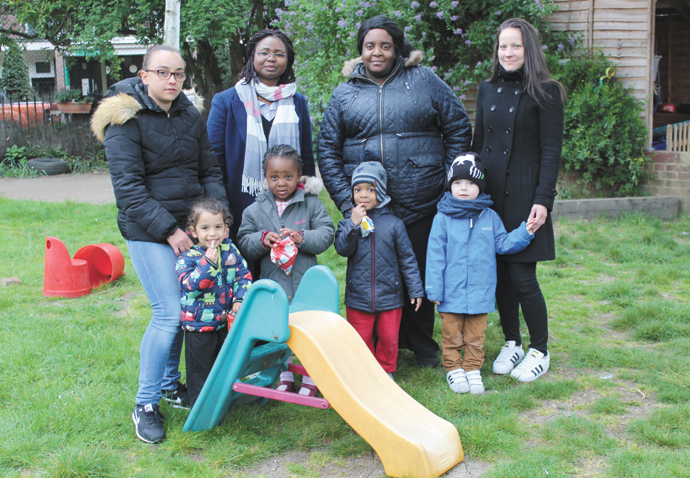 A FINSBURY nursery facing closure after an extraordinary land row with the Town Hall has been given a last-minute temporary reprieve.

Parents of toddlers who attend East West Community Nursery had been bracing themselves for the closure today (Friday) but earlier this week Islington Council wrote stating that it would not take place.

The reprieve has left parents and children “in limbo” as the future of the Mitchell Street nursery hangs in the balance.

Leeanne Byrne, whose two-year-old son Esen Beydola has only a few months left at East West before starting school nursery, said: “I have not got the heart to tell my son and I don’t know what to tell him. We are in limbo.

“Pulling my son out of nursery to go to another one for just a few months will be so disruptive for him. He would be totally unprepared for such a sudden change.

“Esen loves the nursery and really enjoys the garden, which is a great size. No wonder everyone is keen to get their hands on the land.

“There seems to be a fight on for the land by the council and the administrators and our poor children are stuck in the middle.”

The nursery is a charity offering affordable Mont­essori-style education for children aged between two and five. It went into administration last summer with debts running to almost £75,000. David Rubin and Partners were appointed as administrators.

The administrators maintain this allows the nursery to claim adverse possession, which is similar to squatters’ rights.

The council wants to redevelop the valuable patch of land for social housing and community facilities. Parents have been told they will have to find alternative nurseries for their children.

But Ms Byrne, whose son Karel, 5, also attended the nursery, says that the help given to parents to find alternatives has been scant.

“Really, we have just been given a list of nurseries and there is no guarantee there will be a space,” she said.

Robert Agsterribe, a partner in Bliss Investment Properties, dubbed the council actions “insanity”. “The council is continuing to threaten it will go through, let’s say, the proper channels to evict the nursery but I suspect that even if it did do that it would take quite a long time,” he said.

“From our point of view it just seems insanity to do that.

“Why a council, which quite rightly claims to have the children’s best interests at heart, would then do the one action that flies in the face of that is slightly confusing.”

A council spokesman said: “Islington Council owns this land, and will robustly resist any att­empt by the nursery administrators to claim any legal interest in the land.

He added that design work was underway to redevelop the land to provide affordable council homes, a leisure centre, GP surgery and nursery.

“We’re preparing to carry out further public consultation on our plans, and are determined that administrators’ actions will not frustrate our long-held ambitions to im­prove the area,” he added.