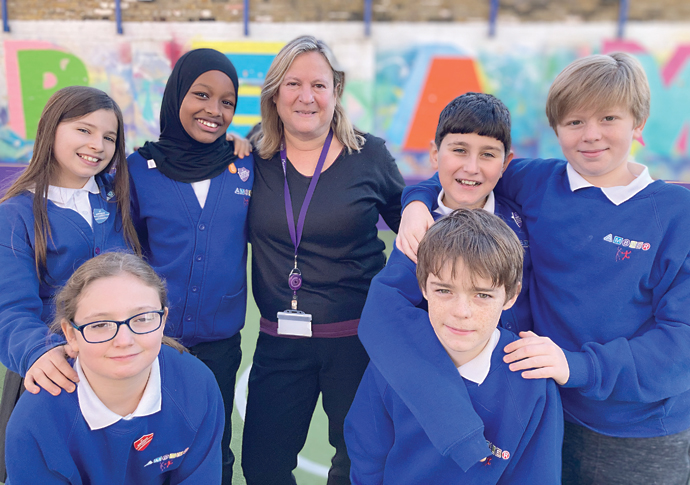 Amber Primary School headteacher Juliet Benis with pupils (back row from left) Eleanor, Aamilah, Alessandro and Alfie; front: Ellie and Felix. Ms Benis has announced she will be leaving the Finsbury Park school at the end of the academic year

A POPULAR primary school headteacher who has announced plans to step down says the Covid crisis provided the chance to think about her future and make a change.

Juliet Benis, 60, said parents’ WhatsApp groups had been “blowing up” after she revealed she would be leaving Ambler Primary School in Finsbury Park – rated “outstanding” by Ofsted.

She has been in the role 15 years and is now deciding what to do next, but told the Tribune that she did not want to move to another school as “Ambler is my school”.

She arrived at the school as a newly qualified teacher, working her way up to the headteacher’s post.

Describing the school when she first joined, she said the building was so bad that pupils’ work hanging on the walls used to get ruined whenever it rained as the ceilings leaked. Parents would be wandering through the halls trying to find someone to pay dinner money to.

Ms Benis joked that she is a “control freak” with a slight obsession with tidiness, but she is proud that the building is now “bright and modern and clean” and that she “taught the cleaners the word corner”.

She also oversaw the building of the lodge, a multi-use space used for interventions and after-school clubs as well as weekend gardening clubs for parents, along with the studio, where the school’s therapists come to work three days a week.

Ms Benis is currently in the process of getting funding for facilities for children with special educational needs. She has also recently got stuck into overhauling the school dinner menu and plans to take 30 students to Jamie Oliver’s London restaurant as part of the project.

But now she feels it is the “right time to leave”, adding: “I don’t want to be one of those heads who just stays in the job and becomes over-comfortable. I want to dive into something exciting and new.”

Whether she takes up one child’s suggestion and starts working as a lollipop lady or not, she says she is open to ideas as to her next step but she does want to still be “making a difference” in her next role.

The challenge of the coronavirus pandemic, Ms Benis said, had given her the push she needed to make a change, as at times it left her feeling like she was “carrying the weight of the world”.

She will leave the school at the end of the academic year in July.