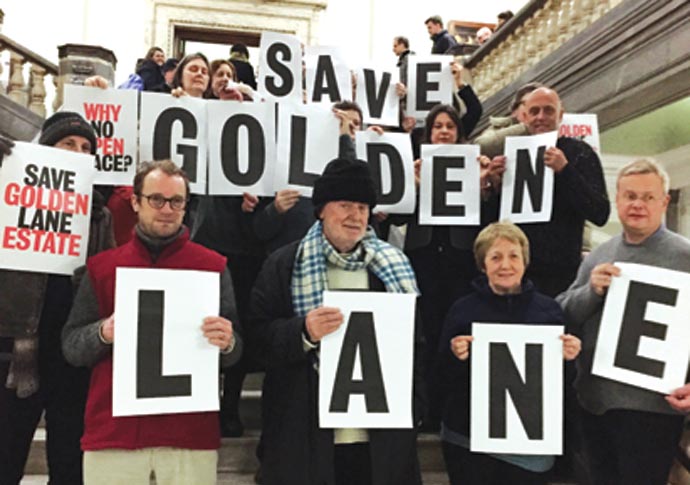 Residents making their protest on the estate earlier this month

A TOWER block of social housing and a primary school being built in the heart of a historic estate will prove to be a “mistake”, residents warned this week.

The 14-storey block and school for 420 students in Finsbury’s Golden Lane estate was approved by Islington Council earlier this month, despite more than 130 objections to the Town Hall.

Charles Humphries, chairman of the residents’ association at the Grade-II listed Golden Lane estate, said the designs “don’t make the most efficient use of the site”.

He said: “We welcome the development of that site and social housing. But we don’t think such a large school would be useful. It’s only such a big school because you can’t get funding for smaller ones.”

The site lies in both Islington and the City, and the two authorities have teamed up to develop the former site of the Richard Cloudesley School, which has been empty for almost a decade. 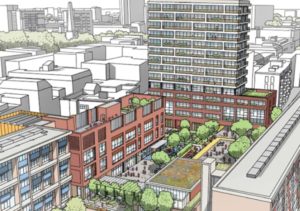 The social housing unit allocations would be split 50/50 between the City of London and Islington.

The primary school would be the new home of the City of London Primary School Islington, which is temporarily based at Moreland Primary School in Clerkenwell.

Mr Humphries said the planning committee meeting felt akin to a “show trial” because the councillors appeared to have already made a decision before the meeting.

He said: “The councillors didn’t say very much.

“If the plans were proposed by a private developer it would not have been passed.”

The existing Golden Lane estate was designed by Chamberlin, Powell and Bon, the firm that would later go on to design the Barbican, which is viewed as one of the finest examples of Brutalist architecture.

Residents in the area have said they feel “under siege” as a block of 99 luxury apartments called The Denizen was also approved by the City on the edge of the estate.

But parents of schoolchildren attending Moreland School told the planning committee meeting a new school was necessary on the site to match demand in the borough.

The plans will now be put in front of a committee at the City of London on March 26, who will determine the future of the site.