‘We’ll be good listeners,’ says council leader as she invites residents to say what they really think

Town Hall seeks ideas on how it can make the borough a better, fairer place for everyone – whatever their background 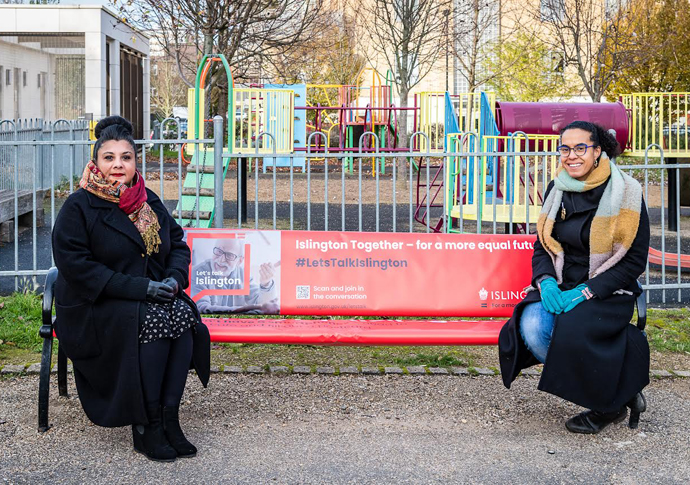 THE Town Hall says it wants residents to come up with ways to make the borough a fairer place to live and work.

With Islington still a borough of extremes – the very affluent living close to those struggling in severe poverty – councillors have launched what they call a “listening project”.

The move comes 10 years after Islington received plaudits for trying to take a forensic look at the divide through a programme called the Fairness Commission.

That study similarly asked people in Islington to share what was wrong with living here, leading to stark warnings about how expensive life in the borough is and the number of people just about managing the stay above the breadline.

People from all walks of life gathered to talk about their experiences of inequality in Islington – and what to do to make it better. Some of their first thoughts are included in the panel below.

Islington Council leader Kaya Comer Schwartz then unveiled the new branded benches which will encourage people to take part in the survey.

She said it was the perfect time to launch a new “conversation” following 10 years of austerity measures, the Black Lives Matter protests that gathered steam last summer, the new resolve to tackle the climate emergency movements and the fallout from Brexit and the Covid pandemic.

She said she was “really excited” to hear ideas from people about how to improve health and well-being in the borough, as well as creating more opportunities for training and employment.

The council also wants to hear suggestions on how to give young people better opportunities and give people housing security.

“We haven’t had a meaningful in-depth conversation in some time,” said Cllr Comer-Schwartz. The borough has always been quite diverse. It’s also economically quite polarised, and throughout the pandemic that’s got worse. So this felt quite timely for us.”

She accepted that there were still “real entrenched problems in our borough” despite the efforts of the Fairness Commission to reduce the inequality between richest and poorest, and that Islington wanted to work out how to overcome deep rooted barriers.

Despite the abundance of wealth in Islington, it is the 26th most deprived local authority in England.

At the time of the Commission’s final findings, Islington adopted the living wage for its employees and cut the chief executive’s pay by £50,000 to reduce the pay gap at the Town Hall between the highest and lowest paid to a ratio of 1:12.

Cllr Comer Schwartz said they had met the report’s many recommendations.

The new scheme will run until spring 2022, with a variety of ways to contact Islington, such as via QR codes on benches and posters around the borough. To find out more, go to https://www.islington.gov.uk/about-the-council/vision-and-priorities/lets-talk

Priced out? First bit of feedback warns how people struggle to afford a home

THERE’S a lot of diversity in Islington but we want more equality. At our cafe we try and help everyone – we have rich, poor, old, young.

We’re a community anchor: we believe everyone deserves a chance.

I really want to promote the community and see that it has more involvement and more say in what happens in the area. People need more of a helping hand and support with their mental health. I welcome this project as I hope it will improve the area and give people more opportunity. We want the area to thrive.

THERE’S no support for the young people – there are not enough places for them to go, unlike before when they had after-school activities.

We see youngsters roaming the streets or getting excluded from school – but there’s no where for them to go and no one to guide them.

If an opportunity to earn easy money comes along – from crime – of course they’ll go for it. Kids are lost and need help to find a way. 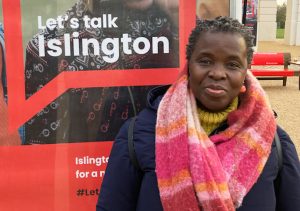 OUR projects helps black women who facing loneliness or difficulties such as employment or housing.

It could be women who have just given birth, have problems with speaking English, or having problems accessing community services and resources.

We need to improve how we access support. In a neigh­bourhood where rich and poor live together, we need to be balanced and equal.

It’s good to now check on what they [the council] have put in place and see if it’s working or whether the situation needs updating.

I WOULD like more priority given to young people for housing – I’ve got a four-year-old daughter and I have been in temporary accommodation for two years.

I live in one room with my daughter – there’s no privacy. I know other people who have been like this for years – it makes you feel hopeless.

I look around and they’re building these fancy flats. Who are these duplexes for when ordinary people cannot afford to live here? It is isolating and dispiriting. Waiting for council housing feels like forever and I can’t make plans.

What we saw before the pandemic was the same as during the pandemic but a light was shone on the inequality in the borough.

There is totally inappropriate housing for families here.

We see families waiting for many, many years and we have no idea why it’s so hard to find them better housing.

The housing issue covers all kinds of areas – children with no space to study, or people with no space to work from home. There are so many issues here: childcare, food, training for young people. These issues need solutions.

I’d like to see more opportunities given to young people in the way of work.

I’m studying IT which is not something I would have thought possible before this course came along – it’s government funded, which for me is pretty priceless.

The barriers to me getting into a meaningful career were not having the right grades from school or the relevant experience. Young people need to be told all hope is not lost if they don’t get specific grades – after I left school, aged 16, I was no longer under school’s super­vision and got no help or advice.

The search for fairness 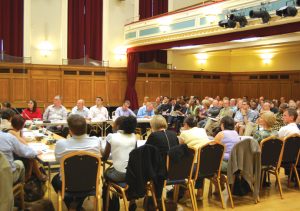 One of the packed public meetings

ISLINGTON will be hoping it can secure the same enthusiasm from the public for its new “listening project”, as it did for the Fairness Commission 10 years ago.

In the search for solutions to the financial and social divides that run through the borough, hundreds of people would turn up to public meetings, offering thoughts about how to make the area better.

Crucially, the council said it would act on the recommendations, rather than leaving it as a well-meaning but forgotten report. The measures may have only chipped away at the edges against entrenched patterns but the levels of engagement were admirable.

Richard Wilkinson, author of The Spirit Level, was the independent chair.